That prospect is now in grave doubt. I am convinced that the United States can still shape the future of the Israeli-Palestinian conflict before a change in presidents, but time is very short. The simple but vital step this administration must take before its term expires on Jan. 20 is to grant American diplomatic recognition to the state of Palestine, as 137 countries have already done, and help it achieve full United Nations membership.

Back in 1978, during my administration, Israel’s prime minister, Menachem Begin, and Egypt’s president, Anwar Sadat, signed the Camp David Accords. That agreement was based on the United Nations Security Council Resolution 242, which was passed in the aftermath of the 1967 war. The key words of that resolution were “the inadmissibility of the acquisition of territory by war and the need to work for a just and lasting peace in the Middle East in which every state in the area can live in security,” and the “withdrawal of Israel armed forces from territories occupied in the recent conflict.”

The agreement was ratified overwhelmingly by the Parliaments of Egypt and Israel. And those two foundational concepts have been the basis for the policy of the United States government and the international community ever since. 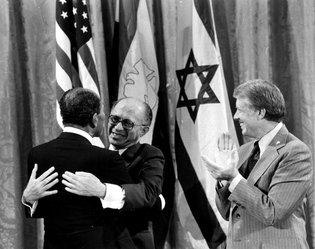 From left, President Anwar Sadat of Egypt, Prime Minister Menachem Begin of Israel and President Jimmy Carter of the United States in 1978 during the White House announcement of a Middle East peace agreement reached at Camp David.

This was why, in 2009, at the beginning of his first administration, Mr. Obama reaffirmed the crucial elements of the Camp David agreement and Resolution 242 by calling for a complete freeze on the building of settlements, constructed illegally by Israel on Palestinian territory. Later, in 2011, the president made clear that “the borders of Israel and Palestine should be based on the 1967 lines,” and added, “negotiations should result in two states, with permanent Palestinian borders with Israel, Jordan and Egypt, and permanent Israeli borders with Palestine.”

Today, however, 38 years after Camp David, the commitment to peace is in danger of abrogation. Israel is building more and more settlements, displacing Palestinians and entrenching its occupation of Palestinian lands. Over 4.5 million Palestinians live in these occupied territories, but are not citizens of Israel. Most live largely under Israeli military rule, and do not vote in Israel’s national elections.

Meanwhile, about 600,000 Israeli settlers in Palestine enjoy the benefits of Israeli citizenship and laws. This process is hastening a one-state reality that could destroy Israeli democracy and will result in intensifying international condemnation of Israel.