“We understand the lack of enthusiasm for her candidacy, the anger over her private email server, family foundation and income from Wall Street speeches, and the questions about how America fared in foreign affairs when she was secretary of state,” the endorsement reads. “But despite Trump’s insistence otherwise, she has the better temperament to be president—and the experience, background and relationships with world leaders that we need in a president.”

The Union-Tribune’s endorsement came mere days after the Arizona Republic endorsed the first Democratic presidential candidate in its 126-year history. Earlier, the Cincinnati Enquirer, the Dallas Morning News, and Houston Chronicle all broke with tradition to endorse Clinton.

Inside the scramble to oust Debbie Wasserman Schultz

Debbie Wasserman Schultz will step down from her position as DNC chairwoman at the end of the Democratic National Convention this week. | AP Photo

PHILADELPHIA — Hillary Clinton and her team aren’t thrilled that the head of the Democratic National Committee was forced out on the eve of the nominee’s coronation – but they aren’t exactly distraught to see Debbie Wasserman Schultz booted from the tent.

Several senior Democratic officials with ties to Hillary and Bill Clinton told POLITICO that campaign higher-ups have been trying to replace the oft-off-message Florida congresswoman from the start of Clinton’s campaign late last year.

John Podesta, Clinton’s campaign chairman – and a former top adviser to Barack Obama – broached the idea of replacing Wasserman Schultz as early as last fall, only to be rebuffed by the president’s team, according to two people with direct knowledge of the conversation.

The move had to happen on Sunday, said a senior Democrat: Sanders-supporting delegates — without the buy-in of his campaign — had been organizing an effort over the last day to have state delegations vote to demand her resignation at the Monday morning caucus breakfasts. Given how many delegations are made up of a majority of Sanders supporters, the movement was likely to have spread, overtaking any other news on the convention’s opening day.

Clinton campaign officials declined numerous attempts by phone, email and text to respond to this story.

But the Clinton campaign was very much involved in the DNC chair’s defenestration. Earlier in the day Sunday, Sanders had again suggested that Wasserman Schultz should resign — and DNC officials announced she would be replaced as convention chair by Ohio Rep. Marcia Fudge, an influential member of the Congressional Black Caucus. By sundown – after intense negotiations with senior Clinton campaign officials — the committee tapped longtime Clinton aide, TV surrogate and party vice-chair Donna Brazile as interim chairwoman.

Despite its claims to want to unify voters ahead of November’s election, the Democratic party appears to be pushing for an agenda that critics say ignores basic progressive policies, “staying true” to their Corporate donors above all else.

During a 9-hour meeting in St. Louis, Missouri on Friday, members of the DNC’s platform drafting committee voted down a number of measures proposed by Bernie Sanders surrogates that would have come out against the contentious Trans-Pacific Partnership (TPP), fracking, and the Israeli occupation of Palestine. At the same time, proposals to support a carbon tax, Single Payer healthcare, and a $15 minimum wage tied to inflation were also disregarded.

In a statement, Sanders said he was “disappointed and dismayed” that representatives of Hillary Clinton and DNC chairwoman Debbie Wasserman Schulz rejected the proposal on trade put forth by Sanders appointee Rep. Keith Ellison (D-Minn.), despite the fact that the presumed nominee has herself come out against the 12-nation deal.

With one of the most closely watched presidential primary seasons in modern times , California’s voter rolls grew by almost 650,000 in the final six weeks of registration. And three of every four new voters were Democrats.

On Friday, Secretary of State Alex Padilla released the final report of voter registration prior to the June 7 statewide primary. The deadline to register for Tuesday’s election was May 23.

All the numbers spell disaster for Trump: Latest projections portend electoral doom for both the billionaire and Republicans in November

Donald Trump’s dominance has obscured just how unpopular he is outside of the conservative bubble. Even among Republican voters, if you dig a little deeper, you find that Trump has serious problems. Nate Silver elaborates: “Trump has consistently had the plurality of Republican support in polls, but those same polls suggest that Trump faces unusually high resistance from voters who don’t have him as their first choice…Many of them would be unhappy with a Trump nomination, more than is typical for a polling front-runner.”

In short, Trump is extremely popular with his base, but deeply disliked by everyone else. Republican voters who have supported Cruz or Rubio or Kasich will not reliably unite behind Trump in November – that’s a problem for the GOP. Now that Cruz and Kasich are backing away from their pledge to support Trump if he wins the nomination, the landscape is even more challenging.

It’s worse if you extend the analysis to include the broader electorate. As The Washington Post reports, “If Donald Trump secures the Republican presidential nomination, he would start the general election campaign as the least-popular candidate to represent either party in modern times…Three-quarters of women view him unfavorably. So do nearly two-thirds of independents, 80 percent of young adults, 85 percent of Hispanics and nearly half of Republicans and Republican-leaning independents.”

These are daunting numbers. There is no discernible path to the White House for Trump against this kind of resistance. In the 32 years the Washington Post-ABC News survey has been tracking candidates, no major-party nominee has produced unfavorability scores like this. 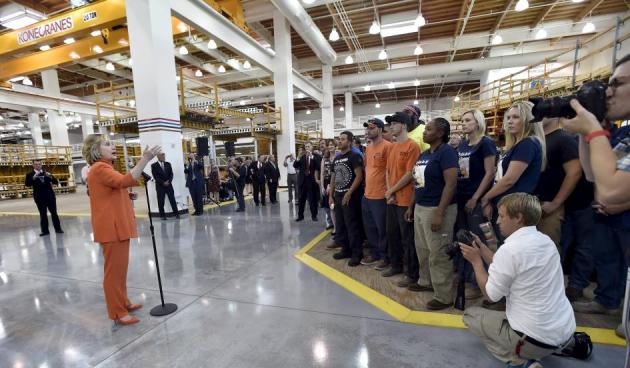 NEW YORK (Reuters) – California nurse Katy Roemer remembers how at the height of the Ebola crisis last year, U.S. Senator Bernie Sanders marched arm-in-arm with union workers as they fought for hazmat suits and other protections to treat patients with infectious diseases.

Roemer’s gratitude is why she keeps a large stash of “Bernie” stickers and posters in her car and is urging people she knows to back his White House bid. She jokes that she will be telling friends and family members: “You’re not coming to dinner if you didn’t vote.”

If Hillary Clinton wins the Democratic nomination, Roemer said she would vote for her in the November 2016 general election but she will not volunteer for her campaign.

Roemer’s comments crystallize a risk Clinton faces as she courts organized labor—a potential enthusiasm gap. Clinton, the Democratic front-runner, has racked up a string of formal endorsements, but many rank-and-file union members remain drawn to Sanders.