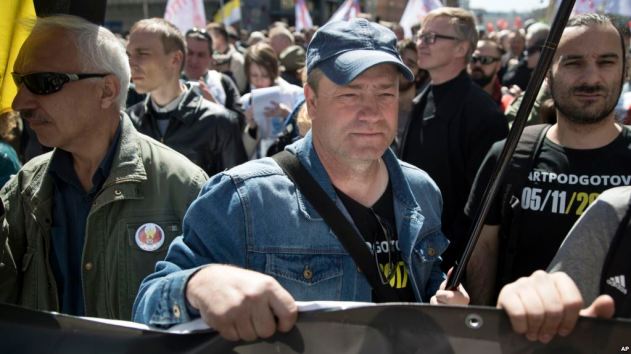 Ilya Osipov, center, attends an opposition rally in Moscow downtown, Russia, May 6, 2017. People gather for the rally against the Kremlin and demanding the release of political prisoners, five years since the opposition protest at May 6, 2012, that ended in violent clashes between demonstrators and police.

MOSCOW — Thousands of Russian opposition activists held a rally in Moscow on May 6 to mark five years since the 2012 Bolotnaya Square antigovernment protest in Moscow.

Participants chanted slogans like “Russia without Putin!” and “Putin is a thief!”

On May 6, 2012, several thousand Russians demonstrated on Bolotnaya Square in Moscow against Putin’s reelection, and there were clashes with police during the event.

Between 400 and 700 people were detained. Dozens have been prosecuted and many have spent time in pretrial detention or been sentenced to prison. Some remain behind bars.

Fearing persecution, several other people, who had not yet been officially accused, left Russia and were granted asylum in Spain, Sweden, Lithuania, Estonia, and Germany.