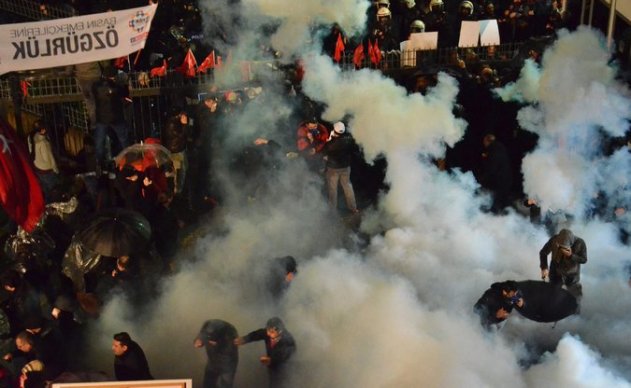 ISTANBUL — Backed by a court order, the Turkish authorities moved on Friday to seize Zaman, the country’s most widely circulated newspaper, in the latest crackdown by the government of President Recep Tayyip Erdogan on freedom of the press.

The seizing of the newspaper also highlighted the government’s building campaign against those it perceives to be its two greatest enemies: opposition journalists and the followers of Fethullah Gulen, a Muslim cleric affiliated with the newspaper who lives in exile in Pennsylvania. Mr. Gulen was once an ally of Mr. Erdogan’s but is now a bitter enemy.

As news of the takeover became public Friday afternoon, supporters began gathering in front of the newspaper’s offices in Istanbul, and employees locked a door to the building. In a live-stream broadcast on the newspaper’s website, supporters were seen chanting, “Free press cannot be silenced.” Some carried Turkish flags and banners emblazoned with, “Do not touch my newspaper.” Columnists from the paper were also seen addressing the crowd.

“We are going through the darkest and gloomiest days in terms of freedom of the press, which is a major benchmark for democracy and the rule of law,” read a statement issued by the editors of Today’s Zaman, an English-language sister publication to Zaman. “Intellectuals, businesspeople, celebrities, civil society organizations, media organizations and journalists are being silenced via threats and blackmail.”