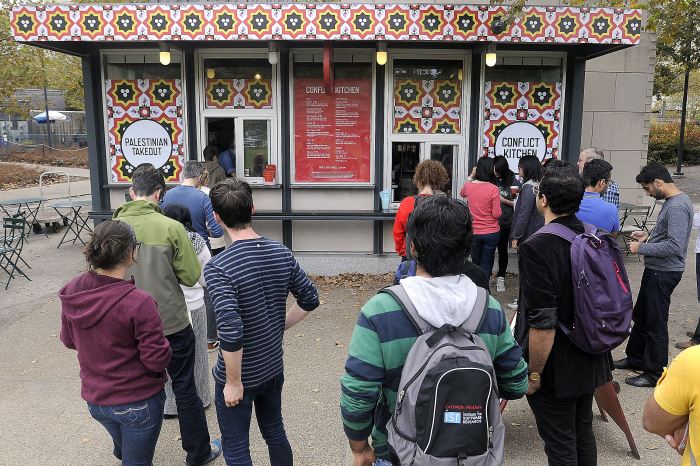 There were long lunch lines at the Conflict Kitchen in Schenley Plaza in Oakland for the first day of its Palestinian menu.
Bob Donaldson/Post-Gazette

Conflict Kitchen in Oakland’s Schenley Plaza debuted its rotation of Palestinian dishes Monday. By noon, more than 30 customers stood in line to order fattoush, falafel, musakhan and other foods.

Though the lunch hour went smoothly, not everyone was happy with the restaurant’s decision to focus on Palestine as part of its rotation to serve food from nations in conflict with the U.S.

Some Jewish organizations cited the Palestinian focus and related event programming as one-sided and anti-Israel.

Tensions flared last week during a kickoff talk for the Palestinian focus that the restaurant co-hosted with the University Honors College at University of Pittsburgh. It featured Nael Althweib, an internist originally from the West Bank, and Pitt professor Ken Boas, chair of the Israeli Committee Against House Demolitions-USA.

Read more at the Pittsburgh Post-Gazette