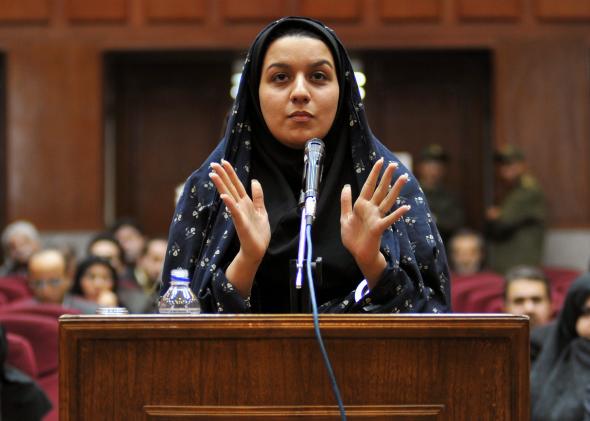 A picture taken on Dec.15, 2008 at a court in Tehran shows Iranian Reyhaneh Jabbari speaking to defend herself during the first hearing of her trial for the murder of a former intelligence official.

By Daniel Politi in Slate

Iran hanged a woman on Saturday who was convicted of murdering a man she said tried to rape her, ignoring an international campaign urging the country to spare her life. Reyhaneh Jabbari was sentenced to death in 2009 for the 2007 killing of a former government employee. The 26-year-old has said she acted in self-defense when she stabbed the 47-year-old Morteza Abdolali Sarbandi, reports the Guardian.

The United Nations and Amnesty International had both said Jabbari never received a fair trial. Amnesty International said the investigation into the killing had been “deeply flawed.” Jabbari’s claims that a third person was actually the one who killed the man who had tried to sexually abuse her “do not appear to have ever been properly investigated,” according to AI. The State Department condemnned the execution due to “serious concerns with the fairness of the trial and the circumstances surrounding this case, including reports of confessions made under severe duress.”