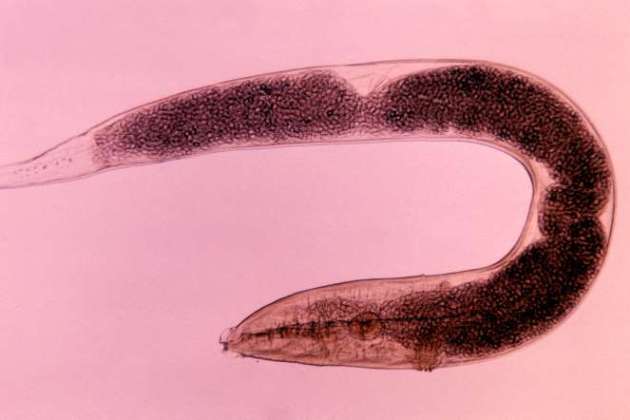 I saw this today and thought it is interesting information especially since the world is growing in population and getting smaller in terms of travel by people. When we think of climate change, warmer ones especially, there is also a continuous movement of viruses, bacteria and parasites. An event brought on by travel and change.

From MSN – Worst parasites in the world

While Ebola currently grabs the headlines, parasites impact millions of people around the world, year in and year out. In fact, the number one parasitic disease kills about a million people annually.

There are about 342 parasites that affect humans, in the world, at last count. Of course, more can show up that haven’t been recorded because of a lack of proper public health in too many areas of the world.

From Wikipedia: Wuchereria bancrofti is a human parasitic roundworm that is the major cause of lymphatic filariasis. It is one of the three parasitic worms, besides Brugia malayi and B. timori, that infect lymphatic system to cause lymphatic filariasis. These filarial worms are spread by a mosquito vector. W. bancrofti is the most prevalent among the three and affects over 120 million people, primarily in Central Africa and the Nile delta, South and Central America, and the tropical regions of Asia including southern China and the Pacific.[1] If the infection is left untreated, it can develop into a chronic disease called elephantiasis.[2] In rare conditions it also causes tropical eosinophilia, an asthmatic disease. Limited treatment modalities exist and no vaccines have been developed.

The secondary aspect of all of this is the cost of medical treatment and the cost of the drugs needed to cure people.

A third aspect is that what we use for drugs may also mutate what we are treating with drugs, thus causing more issue’s later.