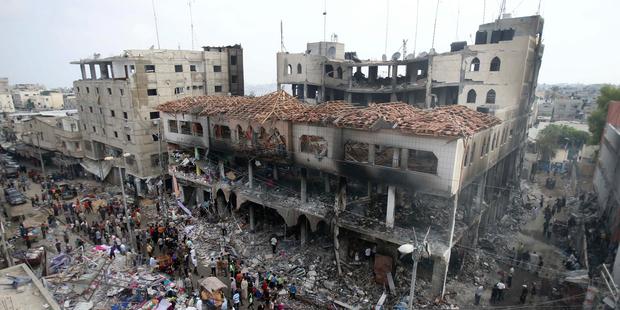 Palestinians gather around the remains of a commercial center, which witnesses said was hit by an Israeli air strike, in Rafah, 2014.
© REUTERS/Ibraheem Abu Mustafa

Air strikes on landmark buildings at the tail end of the Israeli military’s Operation Protective Edge in Gaza in August 2014 were a deliberate and direct attack on civilian buildings and amount to war crimes, says Amnesty International today.

“Nothing is immune”: Israel’s destruction of landmark buildings in Gaza provides evidence that attacks on four multistorey buildings during the last four days of the conflict were in contravention of international humanitarian law and calls for them to be independently and impartially investigated.

“All the evidence we have shows this large-scale destruction was carried out deliberately and with no military justification,” said Philip Luther, Director of the Middle East and North Africa Programme at Amnesty International.

“Both the facts on the ground and statements made by Israeli military spokespeople at the time indicate that the attacks were a collective punishment against the people of Gaza and were designed to destroy their already precarious livelihoods.”