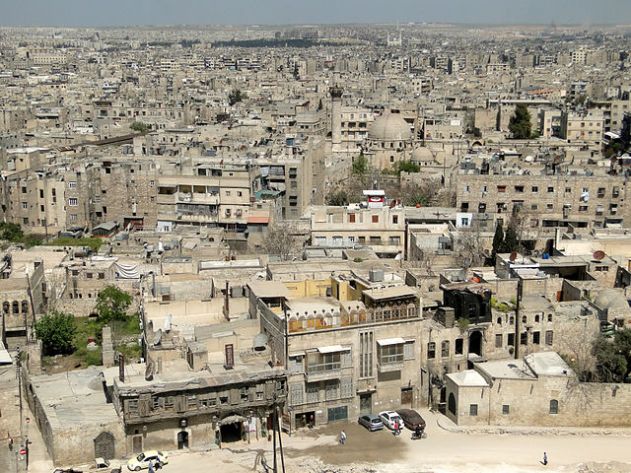 View of Aleppo from the Citadel, Syria By Bernard Gagnon (Own work) [GFDL or CC BY-SA 3.0], via Wikimedia Commons

Aleppo is one of the oldest continuously inhabited cities in the world; it has been inhabited since perhaps as early as the 6th millennium BC.[10] Excavations at Tell as-Sawda and Tell al-Ansari, just south of the old city of Aleppo, show that the area was occupied since at least the latter part of the 3rd millennium BC;[11] and this is also when Aleppo is first mentioned in cuneiform tablets unearthed in Ebla and Mesopotamia, in which it is noted for its commercial and military proficiency.[12] Such a long history is probably due to its being a strategic trading point midway between the Mediterranean Sea and Mesopotamia (i.e. modern Iraq).

Aleppo is now a destroyed city with fighting and bombing still ongoing.  The Enchantment of Aleppo now lives on only on YouTube and Internet and in the hearts and memories of refugees.

The legacy of 5,000 years of Aleppo history ….destroyed in two years.

Like Loading...
‹ If UN Recognizes Palestine, Israel Must Annex in Judea-Samaria
Delaware-sized gas plume over West illustrates the cost of leaking methane ›