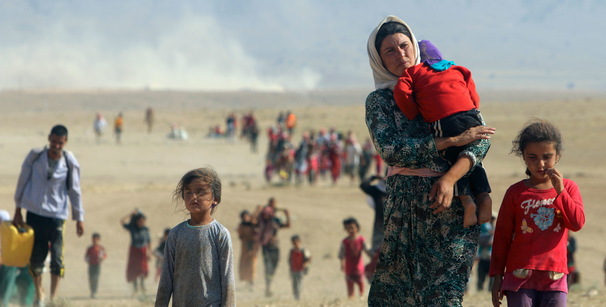 Displaced people from the Yezidi sect, fleeing violence from forces linked to the extremist group Islamic State (also known as ISIS) in the northern Iraqi town of Sinjar, walk towards the Syrian border in August 2014. © 2014 Reuters

The world has not seen this much tumult for a generation. The once-heralded Arab Spring has given way almost everywhere to conflict and repression. Islamist extremists commit mass atrocities and threaten civilians throughout the Middle East and parts of Asia and Africa. Cold War-type tensions have revived over Ukraine, with even a civilian jetliner shot out of the sky. Sometimes it can seem as if the world is unraveling.

Many governments have responded to the turmoil by downplaying or abandoning human rights. Governments directly affected by the ferment are often eager for an excuse to suppress popular pressure for democratic change. Other influential governments are frequently more comfortable falling back on familiar relationships with autocrats than contending with the uncertainty of popular rule. Some of these governments continue to raise human rights concerns, but many appear to have concluded that today’s serious security threats must take precedence over human rights. In this difficult moment, they seem to argue, human rights must be put on the back burner, a luxury for less trying times.

That subordination of human rights is not only wrong, but also shortsighted and counterproductive. Human rights violations played a major role in spawning or aggravating most of today’s crises. Protecting human rights and enabling people to have a say in how their governments address the crises will be key to their resolution. Particularly in periods of challenges and difficult choices, human rights are an essential compass for political action.