‘The Culture War’ — A Battle The GOP Can’t Win 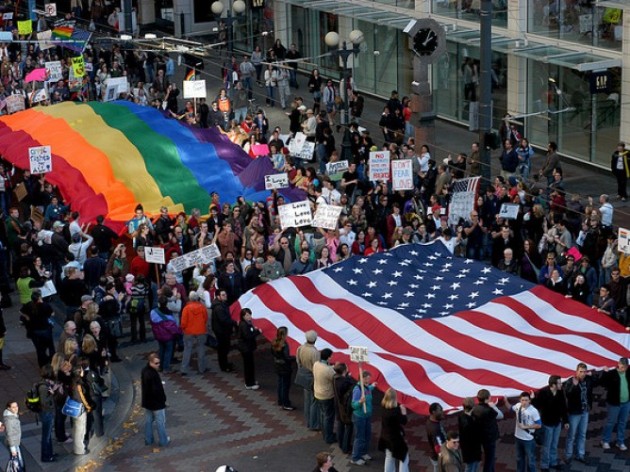 The argument is over and conservatives have lost. Some of them just don’t know it yet.

That’s the takeaway from the remarkable events of last week wherein the states of Indiana and Arkansas executed high-speed U-turns — we’re talking skid marks on the tarmac — on the subject of marriage equality. Legislatures in both states, you will recall, had passed so-called “religious freedom” laws designed to allow businesses to refuse service to same-sex couples. In Indiana, the governor had already signed the bill and was happily dissembling about the discriminatory nature and intent of the new law.

Indiana Gov. Mike Pence made a fool of himself on ABC’s “This Week with George Stephanopoulos,” five times refusing to answer a simple yes or no question about whether the bill would protect a business that refused to serve gay people. Angie’s List, which is headquartered in the state, delayed a planned expansion. NASCAR, the NCAA, the NFL, the NBA, the WNBA, and a host of businesses condemned the law. Conventions pulled out and some states and cities even banned government-funded travel to Indiana.

Down in Arkansas, where similar legislation awaited his signature, Gov. Asa Hutchinson was no doubt watching with interest as Pence was metaphorically shot full of holes. Then he received a tap on the shoulder from a very heavy hand. Walmart, the largest retailer on Earth, born and headquartered in Arkansas, urged a veto, saying the bill “does not reflect the values we proudly uphold.”

Both governors promptly got, ahem, religion. Hutchinson sent the measure back to legislators for revision. Pence signed a measure to “fix” a law whose glories he had spent so much time touting.

And here, a little context might be instructive. Twenty years ago, you recall, we were essentially arguing over the right of gay people to exist. The debate then was over whether they could serve in the military, adopt children, be fired or denied housing because of their sexuality, Ten years ago, public opinion on most of those issues having swung decisively, we were fighting over whether or not they could get married. Ten years later, that point pretty much conceded, we are arguing over who should bake the cake.

The very parameters of the debate have shifted dramatically to the dreaded left. Positions the GOP took proudly just 20 years ago now seem prehistoric and its motivations for doing so, threadbare. This is not about morality, the constitution or faith. It never was.

Read more at The National Memo

Like Loading...
‹ The Economic Risks of Climate Change in the United States
First Hologram Protest in History Held Against Spain’s Gag Law ›