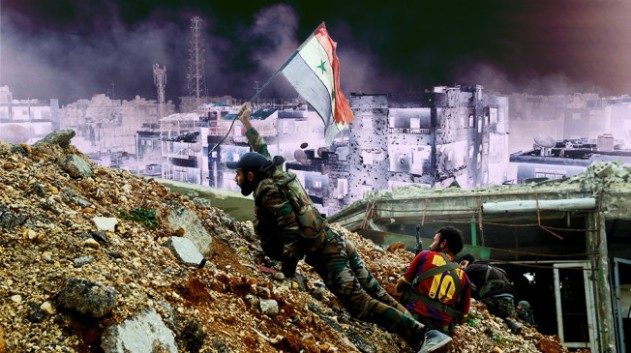 Joshua Landis is head of the Center for Middle East Studies at the University of Oklahoma and publishes the influential blog “Syria Comment.” He is, perhaps, the nation’s foremost expert on Syria. He has been consistently right about the events of the last five years. When most Washington policy-makers were predicting that Syrian President Basher al-Assad would fall, Landis warned that he would hang on to power. While liberals and conservatives were calling for military intervention in Syria to overthrow Assad, Landis advised caution. In this interview, he assesses the Obama administration’s policy in Syria and the prospects facing the new Trump administration as Russia and Iran consolidate their hold over the Northern tier of the Middle East. It is, in my opinion, the clearest and most comprehensive analysis of why the United States failed to get its way in Syria and what it should do now. – John Judis

“Everyone wanted us to solve their Syria problem, whether it was Lebanon or Israel or Turkey or Iraq, because they couldn’t figure out how to do it themselves. Saudi Arabia, the Gulf countries, they all had different visions of who we should be helping and what kind of Syria would come out of the other end of the meat grinder. And had the United States gotten in there, it would not have made a better sausage. We’ve seen that regime change has been a bad idea.”

“The only problem is that the Arab uprisings were not primarily about democracy or even liberalism. Democracy was not a central demand voiced in the slogans of the demonstrators. “Dignity” or “karama” in Arabic and “freedom” or “hurriya” were central words used from Tunisia to Syria; so were phrases such as “down with the regime,” and “get out, Bashar.” Demonstrators were unanimous in wanting to get rid of the oppressive and corrupt dictators that ruled over them. The benefit of these general demands was that Islamists, who wanted a caliphate or Sharia law, could use them as readily as liberals who shared western values.”

“Nationalism is not a strong enough identity to bind the people of Libya, Yemen, Syria, or Iraq together. Or the Palestinians, for that matter. Instead, subnational and supranational identities emerged among the people of each country to undermine common national sentiment. Loyalty to clan, village, region, tribe and religion have bedeviled the Arab uprisings. This is why the opposition movements in Libya or Syria have been so fragmented. It is why thousands of militias formed in Syria. The US was powerless to unite them.”

“Our national religion is democracy. When in doubt, we revert to our democracy talking points, which is what Obama did. It is a matter of faith. He didn’t know what the hell was going on in Syria. I was invited to participate in a number of CIA confabulations and policy “think-out-of-the-black-box” hoedowns during the first months of the uprising. The intelligence community was unanimous in predicting that Assad would fall quickly. People were lost. Everyone was simply projecting their own interests and pet theories onto the uprisings. It was only natural that our aspirations would overtake fact-based analysis. We didn’t have many facts. The situation was moving so fast. We were facing unprecedented changes, so it was easy to get caught up in imagining all sorts of transformations.”

“The radicals won not because America ignored the moderates and starved them. They won because they had better fighters, who were more committed and better led by seasoned fighters who had a vision of the sort of society and government they wished to build. They dominated the battlefield. That’s why ISIS swept through the area Eastern Syria in 2014 and gobbled up most of Sunni Iraq without firing a shot. Islamism proved to be the only ideology capable of uniting Syrians on a national level, binding rebels together from north and south of the country.”

“The so-called moderates were simply local strongmen who gathered around themselves cousins, clan members and fighters from their village and the village next to theirs. But go two or three villages away, and they were viewed as foreigners and troublemakers, who were venal and predatory. They were warlords. Few could gather more than a thousand men around them. Most a lot less. They didn’t have an ideology and couldn’t articulate a vision for Syria. This is why America’s effort to unite the Free Syria Army amounted to a hill of beans. Syrian society is fragmented. Assad and ISIS both deploy lots of coercion, corruption and clientelism to hold their states together, whether they profess ideologies of secular nationalism or Islamic Caliphalism. America cannot buy its way to success in such an environment.”