Ahwaz’s environmental woes at the epicenter of crisis in Iran 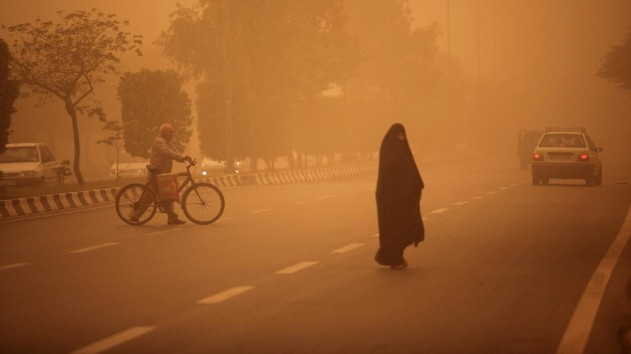 Iranians cross a street as a heavy sand storm hits the city of Ahvaz in the southwestern province of Khuzestan on April 13, 2011 as “unprecedented” sandstorms mostly originating from neighbouring Iraq hit 20 provinces, forcing the shutdown of schools and government offices. AFP PHOTO/MOHAMMAD REZA DEHDARI

Over recent days, Iran has been rocked by massive protests in its southwestern Arab-majority Khuzestan province as power stations have failed and water supplies have been cut off.

Dust storms and poor weather in this region, where temperatures can easily exceed 50 Celsius, are being blamed for the breakdown in utilities.

However, the underlying environmental crisis that has prompted the unrest is a greater threat to Iran’s existence than any internal or external enemy. If Tehran does not listen to the protesters’ demands, it could bring about the death of Iran through hunger and civil war.

Thousands joined protests in Ahwaz, demanding action to resolve an escalating environmental crisis caused by the damming of the region’s rivers, the desertification of wetlands and industrial pollution.

Passionate street protests also greeted the UN Development Program (UNDP) resident coordinator in Iran Gary Lewis when he visited the province earlier this month, accompanied by Iranian chief of Department of Environment (DOE) Vice President Masoumeh Ebtekar. Many protesters and some local officials have bravely demanded Ebtekar be sacked for failing to act to resolve problems that have left residents without basic amenities. The authorities have responded with arrests.

The crisis is fuelling regional resentment in this ethnic Arab region against the central government that is shared not only by protesters but also many local politicians and officials. Many are prepared to go on the record to condemn the government’s atrocious environmental record.

Iran’s leading specialist on desertification, Prof. Parviz Kordavani, warned last week that Iran has depleted 70 percent of its ground water. He said that the provincial competition for water will lead to domestic conflict within five years.

Issa Kalantari, the adviser for water, agriculture and the environment to Iran’s vice president and a former minister of agriculture, warned that if Iran does not change its approach to water use, the result could be mass migration. He said: “Approximately 50 million people, 70 percent of Iranians, will have no choice but to leave the country.” He did not offer a timetable on when this would happen but asked, “With the state of our foreign policy, which countries are ready to accommodate 30 to 50 million Iranians?”