More Than 1,000 Died in South Asia Floods This Summer 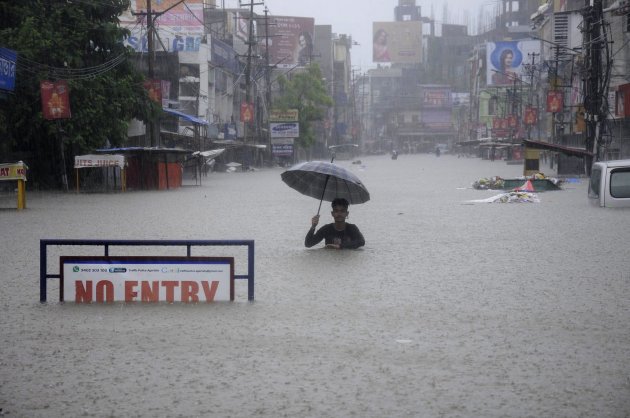 MUMBAI, India — More than 1,000 people have died in floods across South Asia this summer, and as sheets of incessant rain pummeled the vast region on Tuesday, worries grew that the death toll would rise along with the floodwaters.

According to the United Nations, at least 41 million people in Bangladesh, India and Nepal have been directly affected by flooding and landslides resulting from the monsoon rains, which usually begin in June and last until September.

And while flooding in the Houston area has grabbed more attention, aid officials say a catastrophe is unfolding in South Asia.

In Nepal, thousands of homes have been destroyed and dozens of people swept away. Elephants were pressed into service, wading through swirling waters to rescue people, and aid workers have built rafts from bamboo and banana leaves.

India has also suffered immensely. Floods have swept across the states of Assam, Bihar, Odisha, West Bengal and other areas.

This weekend, Prime Minister Narendra Modi flew over the devastation in Bihar, where more than 400 people are believed to have died in floods in recent weeks. He pledged millions of dollars in assistance and urged insurance companies to send in assessors as soon as possible to help farmers cope with their loses.

The International Federation of the Red Cross and Red Crescent said on its website that more than eight million Bangladeshis had been affected by the flooding, the worst in 40 years. At least 140 people have died and nearly 700,000 homes have been damaged or destroyed.

Like Loading...
‹ Afghanistan’s Young Liberal Elites Challenge the Taliban
Russian airstrikes have killed thousands of civilians in Syria since 2015 ›