Children are dying of starvation in the rebel-held region of eastern Ghouta. 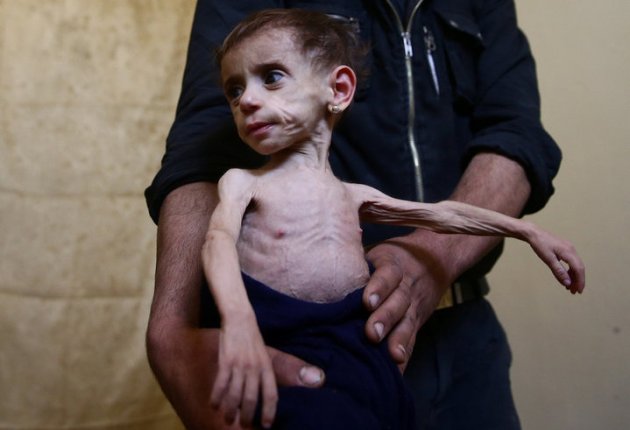 Two-and-a-half year old Hala al-Nufi, who suffers from a metabolic disorder which is worsening due to the siege and food shortages in the eastern Ghouta, is held by her uncle in the eastern Damascus suburb of Ghouta, Syria, October 25, 2017. REUTERS/Bassam Khabieh

Desperate Syrians trapped in eastern Ghouta have started eating garbage to survive as a government-imposed siege tightens around the dilapidated Damascus suburb like a noose. Many famished children in the region have fainted from hunger in recent weeks, according to a new report from the United Nations’ World Food Programme.

Assad has kept the rebel-held region outside Damascus under complete siege since 2013, shortly after a sarin gas attack by his forces killed an estimated 1,429 people there. Hundreds of civilians ― more than half of them children ― have died from food and medication shortages since the start of the siege, the Syrian Network for Human Rights said in a report last month.

“I am forced to divide the scarce food I have, rotating between my 13-year-old daughter and my orphan grandchildren of two and three years of age,” one Syrian woman told the WFP. “My daughter cries every time I lock her door because she knows today is not her turn and will sleep with an empty stomach.”

Like Loading...
‹ Russian airstrikes have killed thousands of civilians in Syria since 2015
Ahed Tamimi Has Become the Symbol of a New Generation of Palestinian Resistance ›