Thousands rally in Moscow to demand release of jailed protesters

Protesters say opposition activists prosecuted in recent months must be freed as they allege campaign to stifle dissent. 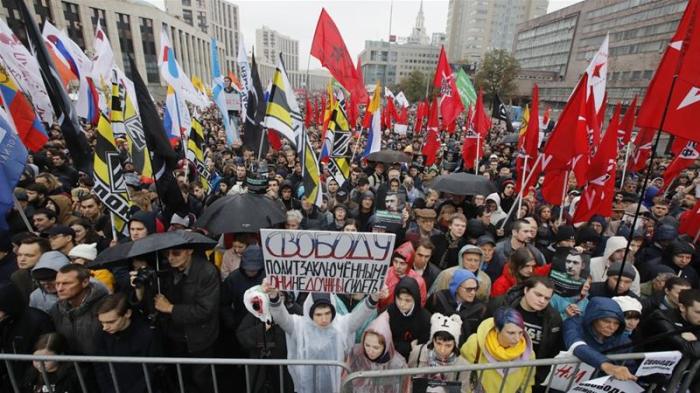 Thousands have taken to the streets in Russia to demand the release of opposition protesters prosecuted in recent months in what the Kremlin’s opponents say is a campaign to stifle dissent.

Police estimated a turnout of 20,000 at a protest in central Moscow’s Sakharov Avenue during rain on Sunday. The demonstration was authorised, unlike several rallies in recent months where police briefly detained more than 2,000 people.

“We have to keep demanding to respect our rights because they have left us no choice but to protest in the streets,” said opposition leader Lyubov Sobol at the protest.

“Some people even have been sentenced for up to three to four years just for attending unsanctioned rallies,” she said.

The current wave of demonstrations was triggered by the refusal of Moscow authorities to allow opposition politicians such as Sobol, an associate of top Kremlin critic Alexei Navalny, to participate in local elections.