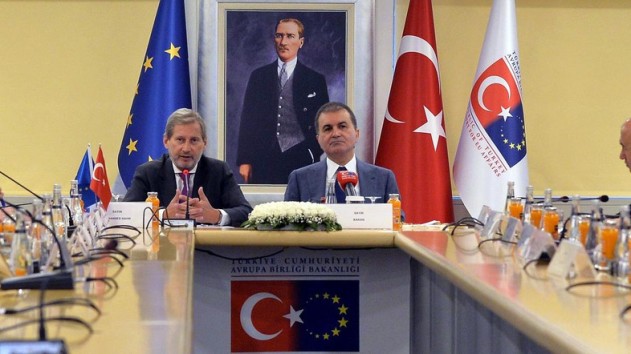 The European Parliament has called for formal suspension of the accession negotiations with Turkey if the constitutional reform package is implemented unchanged. In a report voted on Thursday in Strasbourg, the EU Parliament underlines that the proposed Turkish constitutional amendments do not respect the fundamental principles of separation of powers.

It does not respect the membership criteria. “The violation of the fundamental rights in Turkey should lead to the suspension of the accession talks,” MEPs said during the plenary session on Wednesday.

On Thursday, MEPs adopted the report with 477 in favor, 64 against, and 97 abstentions.

The suspension call reflects the opinion of the majority of European citizens, the MEPs said. Some member-states like Austria are asking to close down the membership perspective.

Last few months, EU-Turkey relations have worsened with Belgium, Netherlands and Germany not allowing Turkish President and his ministers to address the Turkish diaspora during referendum campaign. Germany did not accept President Erdogan’s request to address Turks migrants in Hamburg in the margins of the G20 Summit.

Will EU take the lead on two-state solution?

The EU leadership both at headquarters and in its main member states have become disillusioned with US President Donald Trump’s foreign policy. After Trump’s March 17 meeting with German Chancellor Angela Merkel and US Secretary of State Rex Tillerson’s Feb. 9 meeting with Federica Mogherini, the EU high representative for foreign affairs and security policy, it is clear to both Berlin and Brussels that on the main international agenda issues, the EU will have to develop an independent foreign policy. As an independent policy, it will not depend on US approval, but only on coordination with Washington. A senior EU official close to Mogherini told Al-Monitor on condition of anonymity that while the EU still sees the United States as the leader of the Western world, it is concerned about America’s growing isolationism and significant policy differences on key issues such as Russia, climate change, free trade and the Israeli-Palestinian issue.

With Brexit, a new European coalition is emerging that will be the main contributor to the shaping and defining of EU foreign and Middle East policy. This coalition will include Germany, France and the EU headquarters in Brussels. But the character of this coalition will ultimately depend on the identity of the next French president — be it Emmanuel Macron or Francois Fillon.

The senior EU official told Al-Monitor that based on the current European setup, EU Middle East policy planners are exploring a two-state solution initiative that would probably be launched in June. Such an initiative would include several elements. Obviously, it would include freezing Israeli settlement construction according to Security Council Resolution 2334. It would also include halting official Palestinian incitement of violence. In essence, the initiative would propose an international peace conference with the participation of the Quartet (EU, US, UN and Russia), the Arab League and the parties based on the Oslo agreement, and the Arab Peace Initiative of 2002.

Other elements that the initiative would bring forward for a future Israeli-Palestinian agreement would be that the border between Israel and Palestine would be based on the 1967 lines (with mutual, parallel and agreed-upon land swaps), that Jerusalem would be a united city and the capital of the two states, and that the issue of Palestinian refugees would be resolved in a joint and agreed upon way. As aforementioned, the initiative would be based on the 2002 Arab Peace Initiative and would offer that Arab states normalize relations with Israel. In addition, the EU would support the Palestinian state-building process with modern institution building, economic support and security training. As for Israel, the initiative would offer an upgraded status in its various agreements.