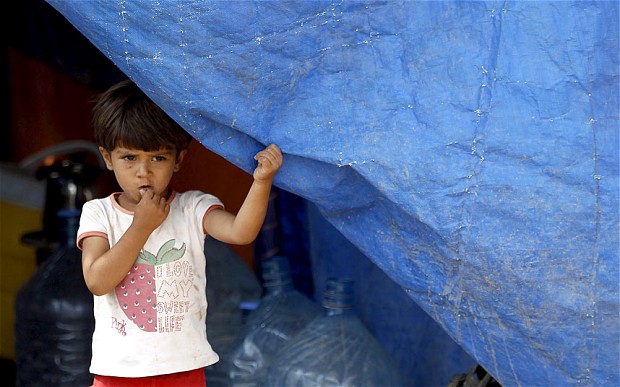 One of the one million displaced Syrian children looks out from her temporary home in Northern Iraq
Photo: THAIER AL-SUDANI/REUTERS

All the easy or neat options on Syria disappeared long ago. But even as Russia intervenes, there are four things that can – and must – be done

The worst moment of my four years as Foreign Secretary was in August 2013, when the House of Commons voted against British military action in Syria. Faced with a violent dictator using chemical weapons in defiance of every treaty and every standard of a civilised world, Parliament opted not to lift a finger.

There were many reasons for the government defeat that day, including our own mistakes of timing and presentation. But the message sent to the world was that Britain was not the force that friends should expect and foes ought to fear. It was a disastrous episode; one which contributed to a perception of lack of resolve in the West’s dealings with the Syrian crisis.

Moderate Syrians despaired, and in the Kremlin one very calculating man took careful note. Now, two years later, President Putin’s advertising of cruise missile launches is a deliberate contrast with a West that hesitated to launch its own.

Russia’s intervention, the growth of Islamic State (Isil) and the desperate migration crisis are the evidence that, however seductive it may be to stand aside from a Middle Eastern catastrophe, the result can be that matters get even worse.

But what is the correct course of action now? In recent weeks, the idea of “safe havens” for beleaguered Syrians, long called for by Turkey, has gained currency among British and American legislators and commentators. The attraction of such an idea is understandable: millions could take refuge in such havens, safe from attack and with no need to move to other countries. People could be protected without a wider military intervention.

“Recent history shows us that the greatest mistake of all is to declare the existence of safe areas and then fail to make them truly safe. That takes troops”

The sad truth, however, is that this proposal is impractical at best and dangerous at worst. And it can only be a distraction from the other measures needed to alleviate such dreadful human misery. Some of its supporters, such as the Labour leadership, say safe havens should be established with UN agreement. But there is no prospect of any such agreement, since Russia would exercise its veto. Calling for it as the solution is not just a form of “we need to do something and this is something to do” but the even worse cop-out of “we need to say something and this is something to say.”

Others believe air power alone could guarantee such havens, recalling the successful protection of the Iraqi Kurds by the RAF in the early Nineties. But that praiseworthy intervention under John Major controlled the airspace over a geographically distinct area, which the shattered army of Saddam could not invade. In Syria’s fluid battlefields, massive ground forces would be needed to defend any “safe” area from terrorist infiltration and short-range bombardment. The most thoughtful advocates of this policy, such as my old colleague Andrew Mitchell and Labour MP Jo Cox, recognise this. Yet no one can say which country will provide the tens of thousands of troops that would be necessary, and be ready to reinforce them if necessary.

Recent history shows us that the greatest mistake of all is to declare the existence of safe areas and then fail to make them truly safe. In Bosnia in 1995, the massacre of 8,000 Muslim men and boys at Srebenica took place inside a zone designated safe by the UN. This haunting tragedy is the reminder that people should only be invited to take refuge by forces with the means and authority, come what may, to protect them.

In an ideal world, of course, the UN Security Council would authorise the protection of the innocent people of Syria, and many nations would volunteer to provide the forces to carry out that task. Sadly, the world is so far removed from that ideal that the concept of safe havens is not going to provide the answer.

All the easy or neat options on Syria disappeared long ago: I sat for many frustrating hours discussing an agreed peace with the Russians as the chances of avoiding the rise of extremists and collapse of the country drained away. Now there should be four priorities, all of them requiring painstaking persistence.

First, the single best way to help refugees is to ensure the UN appeal to help the millions displaced inside Syria and neighbouring countries is fully funded. This is the way food, water, tents and sanitation reach people before another winter, yet it is $3 billion short of its target. Nearly half the money it has received has come from only two nations: the US and the United Kingdom, a point entirely overlooked by the collection of learned judges who have just called Britain’s response “too slow and too narrow”. It is to be hoped their court judgments are a little fairer than that. Amid all the finger pointing at Britain, no other European country even comes close to matching our contribution to keeping refugees alive and families together in Lebanon, Turkey, Jordan and inside Syria itself.

Second, talks at the UN should be focused on agreeing what a future Syria should be like: how its constitution could work, how minorities would be protected, how its independence would be restored – rather than on what happens now to Assad or anyone else. An agreed vision of the future is the only, admittedly slim, chance of common ground. If ever a peace can be agreed, time will take care of Assad; the Dayton peace accords on Bosnia were signed with the tyrant Milosovic still in place, but he still ended up standing before the court in The Hague.

Third, assistance from the West to the more responsible opposition groups should be stepped up in the light of Russia’s intervention. Most Syrians are not extremists of any kind; it is untrue that their future lies only with either a murderous dictator or Isil’s hateful ideology. Unless moderate voices are given support and credibility, there will never be peace and stability in their land.

Fourth, it is time for the UK to join the military effort against Isil in Syria in addition to our operations in Iraq. This is an organisation which directly threatens our security and recognises no borders in its campaign of murder and enslavement.

If MPs vote to take action, they will be doing what is necessary to keep British people safe at home. And they will go some way to erase the impression left in 2013 – that Britain, faced with international calamity, refuses to act.

For The Wonderful Videos and Graphics That Go Along With This Article Please See More Here: ‘Safe havens’ for beleaguered Syrians would be a dangerous distraction – Telegraph