Turkey’s Kurds are caught between an insurgency and a crackdown

Since July’s coup, the war between the government and the PKK has grown more bitter

A CENTURY and a half of Kurdish history stares at Altan Tan from the photographs in his office on the outskirts of Diyarbakir, the heart of Turkey’s restive south-east. His great-grandfather, a merchant who shuttled between Aleppo and Anatolia in the waning years of the Ottoman Empire, inspects the room from one frame. His father, tortured to death in a state prison after an army coup in 1980, looks up from another. Just two years ago Mr Tan, an engineer and member of parliament, had reason to think Turkey’s Kurds were on the verge of a brighter future. He was a key player in the peace negotiations between Turkey’s government and Abdullah Ocalan, the imprisoned leader of the outlawed Kurdistan Workers’ Party (PKK), which seemed about to bring the decades-long war between the government and the PKK to a close.

The vast majority of Turkey’s estimated 15m Kurds opposed July’s coup attempt against the government of President Recep Tayyip Erdogan. Yet having packed its prisons with thousands of followers of the Gulen movement, an Islamic sect held responsible for the coup, the government has turned the crackdown against its Kurdish opponents. Drawing on emergency powers, recently extended for another three months, it has removed 28 mayors from office and suspended over 11,000 teachers accused of PKK sympathies. It has sacked dozens of academics who called for an end to security operations in civilian areas. Earlier this month, it closed 20 mostly Kurdish media outlets. The government even shut down a children’s TV station that aired the Smurfs and other cartoons dubbed into Kurdish. Stripped of immunity earlier this year, at least 50 of 59 MPs from the pro-Kurdish Peoples’ Democratic Party (HDP), including Mr Tan, face terror-related charges.

The new president may undo the economic gains of recent years 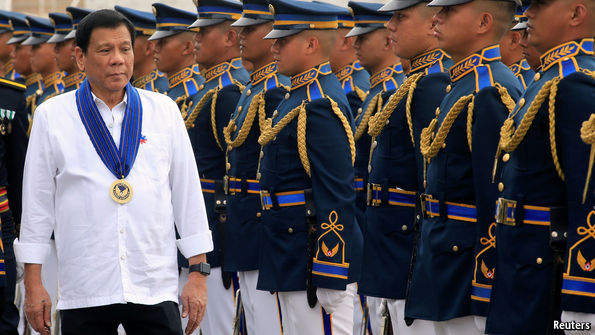 UNDER Rodrigo Duterte, the president of the Philippines since late June, things have a habit of spiralling out of control. First came his campaign against the drug trade, which has led to the killing of almost 3,000 suspected dealers by police and unknown assailants, without even a nod at due process. In less than three months, he has presided over three-quarters as many extrajudicial killings as there were lynchings of black people in America between 1877 and 1950.

When Barack Obama expressed concern about the killings, Mr Duterte called him a “son of a whore”. America’s president tried to shrug off the insult. But Mr Duterte took the row to a new level this week, calling for American special forces to leave the southern island of Mindanao, where they have been training Filipino troops fighting several long insurgencies. “For as long as we stay with America,” he said, brandishing a picture of an atrocity committed by American soldiers more than a century ago, “we will never have peace”.

On September 13th he told his defence secretary to buy weapons from Russia and China rather than America, hitherto the Philippines’ closest ally, and the source of hundreds of millions of dollars in military aid each year. He also said the navy would no longer patrol the South China Sea alongside American vessels. This reversal is all the more surprising given America’s huge popularity in the Philippines.

In other words, Mr Duterte is not just crass and brutal; he is alarmingly volatile. He has little experience of national politics, let alone international affairs, having been mayor of Davao, a city of 1.5m or so, since 1988 (apart from a brief stint as vice-mayor to his daughter and three years as a congressman). Since becoming president, he has threatened to withdraw from the United Nations and to declare martial law. He idolises Ferdinand Marcos, a former dictator who did impose martial law. He says he wants to give Marcos a hero’s burial in Manila. All this, naturally, frightens both local and foreign investors and threatens to undermine the Philippines’ newly acquired status as South-East Asia’s economic star.

Construction above, obstruction below

The 114th Congress may be more productive than its predecessor—just 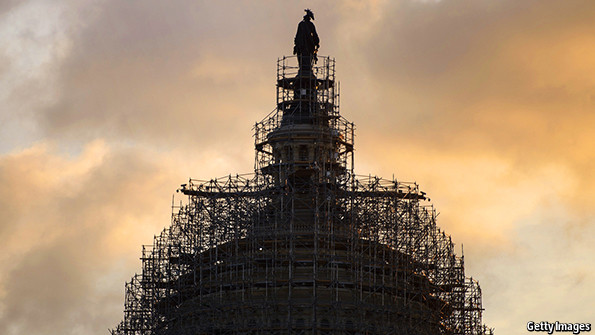 VIEWED from a distance, the scaffolding on the Capitol’s dome makes the building seem perpetually out of focus. The intentions of the congressmen sitting underneath it, who took their seats for the 114th Congress for the first time on January 6th, are similarly fuzzy. They may continue where the last Congress, a notably unproductive one, left off. Or they may work with the president to pass some limited legislation. While they make up their minds, a giant doughnut will be suspended above their heads to let workmen repair the 1,000 cracks that become apparent when the building is seen from up close.

This giant floating bun ought to serve as a warning. In the previous Congress the centre too often went missing; to be more productive, this one will have to find it.

Those who think this will happen argue that Congress works best when it is wholly controlled by one party, as the new one is. When one side holds just one chamber of Congress and the presidency, as was the case for the Democrats between 2010 and the end of 2013, the other lot has plenty of power—in the sense that it can stop things happening—but not much incentive to co-operate in governing. It is harder for a party to act as a protest movement when it is in charge of the legislature. When Bill Clinton found himself faced by a Congress wholly controlled by Republicans, he signed one bill reforming the welfare system and another that cut taxes. When George W. Bush faced a Democratic Congress, he signed a stimulus bill that gave the economy a needed boost in the early part of the financial crisis.