A television presenter in Germany has triggered a huge online debate after calling for a public stand against the growth of racist attacks on refugees.

She said she was shocked at how socially acceptable it had become to publish racist rants under real names.

At a time when the number of refugees arriving in Germany is expected to more than double to a record 450,000 from the 200,000 who arrived last year, tensions are rising in some parts of the country.

In the first half of this year alone there were a recorded 200 attacks on asylum-seekers, including 150 arson or other attacks that have destroyed refugee shelters or made them uninhabitable.

Last week Red Cross workers setting up a tent city for Syrian refugees were attacked by far-right protesters. Some commentators have said the attacks recall Kristallnacht, the organised anti-Jewish pogroms which took place in November 1938.

The response is arguably so emotional because of Germany’s past and the paradoxical situation it finds itself in. The country has one of Europe’s most hospitable asylum systems, introduced as a way of helping it make amends for the Holocaust, but which itself has unleashed some loathsome responses as the numbers have continued to rise – reminiscent of some of the bleakest moments in its history.

The UN refugee agency, which has been helping the Rohingya for more than 20 years, said such a move would be ‘logistically challenging’ 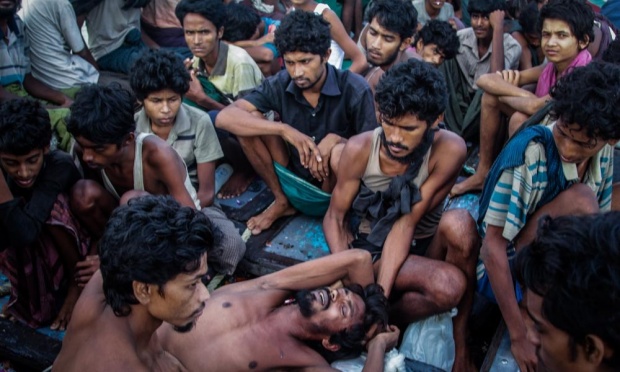 Rohingya migrants on a boat off the coast of Indonesia. Bangladesh and Burma face international scrutiny over the fate of the stateless Rohingya. Photograph: JANUAR/AFP/Getty Images

The remote Bangladeshi island of Thengar Char disappears completely under several feet of water at high tide, and has no roads or flood defences.

But that hasn’t stopped the government from proposing to relocate thousands of Rohingya refugees living in camps in the south-eastern district of Cox’s Bazar which borders Burma to its marshy shores.

Bangladesh said last month it was looking to move the around 32,000 registered refugees – in part because they were hampering tourism in the coastal resort district – home to the world’s longest unbroken beach.

The proposal has been met with alarm from leaders of the Rohingya, who began arriving more than two decades ago after fleeing persecution in Burma, and whose desperate search for a secure homeland has recently been thrown into the spotlight by a regional smuggling crisis.

The US Bureau of Land Management has canceled a hunting derby that targeted the Rocky Mountain gray wolf, among several other animals, after environmental groups sued the federal agency.

“BLM’s first-ever approval of a wolf-killing derby on public lands undermines wolf recovery in the Northern Rockies and was not in the public interest,” said Laird Lucas, director of litigation at Advocates for the West, one of the environmental groups suing.

Up to 500 hunters could have participated in the hunting derby, scheduled to take place in January on three million acres of federally owned wilderness. Hunters could have taken a nearly unlimited number of wolves, skunks, weasels, starlings, raccoons, coyotes and jackrabbits. The derby would have taken place over three days annually, for the next five years.

Gray wolves were previously listed as an endangered species. But the top-tier predators became a political hot potato in the west after some ranchers and hunters felt that environmental groups didn’t live up to their end of a bargain struck in the 1990s when the wolves were re-introduced. Since, the debate surrounding gray wolves has become increasingly polarized.

Asylum seekers registered with UNHCR in Indonesia blocked from resettlement 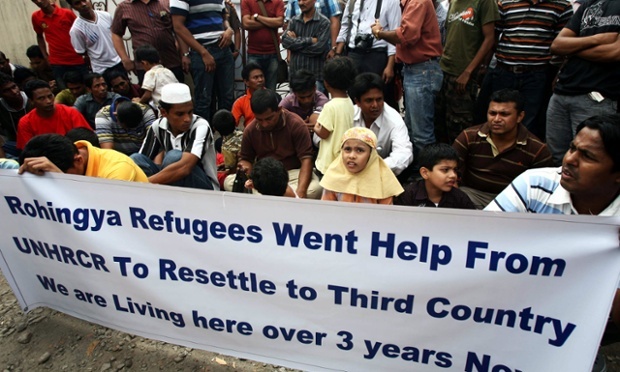 Rohingya refugees in Indonesia hold a banner during a protest outside the UNHCR office in North Sumatra in 2013. Photograph: Dedi Sahputra/EPA

Asylum seekers who have registered with the United Nations High Commissioner for Refugees in Indonesia will no longer be able to be resettled under Australia’s humanitarian program.

The immigration minister Scott Morrison announced on Tuesday that asylum seekers who have registered with UNHCR after 1 July 2014 will no longer be eligible for one of the 11,000 humanitarian program places set aside for asylum seekers living overseas.

The change in policy means that thousands of asylum seekers currently living in Indonesia – who often have limited work rights and social support – will be prevented from ever applying offshore to be resettled in Australia.

Journalists standing in solidarity with our brave Egyptian colleagues

Last month, Egypt’s leading newspaper editors signed a declaration pledging near-blind support for the Egyptian state and vowing to ban criticism of the police, army and judiciary from the pages of their publications. In a remarkable display of both professional integrity and personal bravery, several hundred Egyptian journalists have now signed a counter-statement rejecting this attempt by their bosses to gag reporters and silence their work.

We, the undersigned journalists and media professionals, stand in solidarity with our Egyptian colleagues in their struggle for a free and independent press. Intimidation of the media has been a central tactic of every Egyptian regime in recent years, and the fight by journalists to resist such intimidation has been a vital component of the country’s broader battle against state tyranny. Egypt’s rulers must know that their attempts to repress any form of public scrutiny or dissent will be met with fierce opposition, not just by local reporters but by the wider international community of journalists as well.

Egypt today is one of the most dangerous countries in the world to be working in as a journalist. Although the absurd show trial and subsequent imprisonment of three al-Jazeera English correspondents generated global headlines earlier this year, many other victims of the state’s crackdown on free speech have gone largely unreported. In total, 11 journalists have been killed since the beginning of the Egyptian revolution in 2011, and nearly 70 more, both local and foreign, have been detained since the rise to power of President el-Sisi in July 2013. 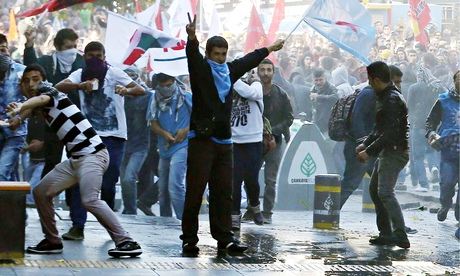 Fighting between Kurdish forces and Islamic State (Isis) militants for the Syrian border town of Kobani fuelled rising tensions inside Turkey on Tuesday as thousands of protesters took to the streets to voice anger and frustration about the inaction of the Ankara government.

In a graphic illustration of the domestic and regional impact of the deepening crisis, demonstrations turned violent and Turkish police used teargas and water cannon.

Following a warning from the Turkish president, Recep Tayyip Erdoğan, that Kobani was about to fall, Turkish media reports said up to 14 people had been killed in eastern cities and dozens more wounded.

The toll included eight deaths in the eastern city of Diyarbakir, the Dogan news agency said. One man was reported to have been killed by a bullet to the head in Varto in the eastern province of Mus when police allegedly fired live ammunition.

Clashes also took place at protests in the western cities of Ankara and Istanbul. Curfews were imposed in five Turkish provinces.

Erdoğan, speaking in the eastern city of Gaziantep, said that a ground operation was needed to defeat Isis – sidestepping accusations that he is unwilling to allow Kurds in Turkey to help their embattled kinfolk in Syria or to deploy the army across the border to fight Isis because of the country’s historic enmity towards Kurdish separatists – in addition to ongoing peace negotiations with them.