The Iranian general who will remain in America’s crosshairs

Sanctions against two Iranian nuclear scientists, who were reportedly Mossad targets, will be removed in eight years, but the US will continue to punish Quds Force leader Suleimani. 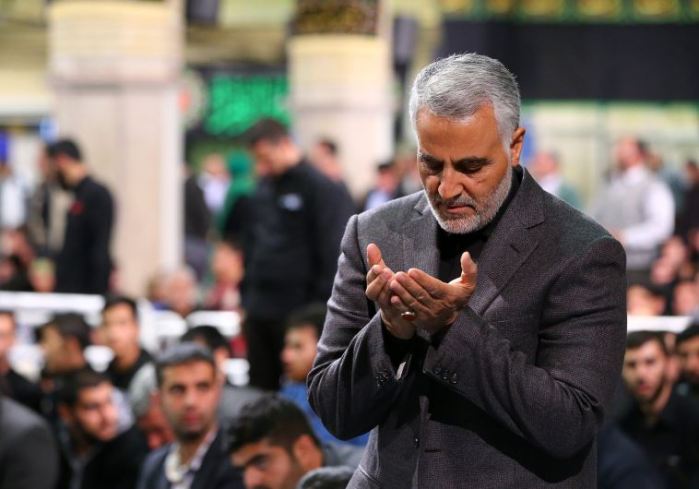 commander of the Iranian Revolutionary Guard’s Quds Force, Gen. Qassem Suleimani, attending a religious ceremony in Tehran to commemorate the anniversary of the death of Fatima, the daughter of Prophet Mohammed.. (photo credit:AFP PHOTO)

The historic agreement reached between world powers and Iran aimed at limiting Tehran’s nuclear program is a complicated and hard to understand labyrinth. It is 150-pages long, includes five appendices and contains some 30 thousand words. Two-thirds of it consists of names of companies, corporations, government offices and individuals included on the list of sanctions levied against Iran since 2006 by the UN Security Council, the US and the European Union.

Iran was already a nuclear threshold state three years ago, before the especially painful sanctions were placed on it. Because of the hard blow that the sanctions dealt to Iran’s economy, its leaders understood that it was time to go to the negotiating table, which it had previously refused to approach.

Alongside maintaining the appearance of national pride and its efforts to minimize international inspection of its nuclear facilities, Iran’s main concern in negotiations with the West was to get the smothering sanctions removed. Iran achieved its goal. A senior Israeli official told journalists that during the 15-year life of the agreement Iran will enjoy – in addition to the unfreezing of some 100 billion dollars of assets in foreign banks – a direct flow of money from the renewal of oil exports and a renewal of trade with the world. This will be worth some 500 billion dollars to Iran.

The blacklist includes the names of some one thousand banks, insurance companies, ships, oil, gas and petrochemical corporations, airlines and aviation companies as well individuals, who are connected directly or indirectly to Iran’s nuclear program, its missile program or its weapons trade. The assets – both liquid and real estate – of everyone on the blacklist were frozen, and all UN member states were forbidden from allowing them into their territory or engaging in commerce with them.

According to the agreement, the sanctions will be lifted, but in the next five years the conventional arms embargo on Iran will continue, and for eight years Iran will not be allowed to import or export missiles and their parts.

The third name [on the blacklist], and perhaps the most interesting of them all, is General Qassem Suleimani, the Commander of the Iranian Revolutionary Guards Quds Force. He is considered one of the most influential people in the Islamic Republic and an extremely close confidant of Iranian Supreme Leader Ayatollah Ali Khamenei.