Eyeless in the West Bank 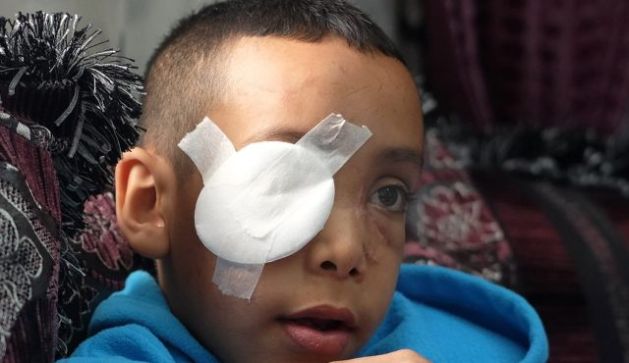 Salah Suleiman is an 11-year-old fifth-grader from Isawiyah, a Palestinian village within Jerusalem’s municipal boundaries. He lost one eye after a bullet was fired at him by the Israeli police, and is now in danger of losing the sight in his other eye, too, according to physicians at Hadassah University Hospital who treated him. They recommended he apply for a certificate of blindness and request transfer to a school for the blind.

Now, some six weeks after a policeman fired a foam-tipped bullet into his face, Salah sits in the living room of his house – he hasn’t been at school since the incident – and gropes his way in the dark that has suddenly descended on his life. His face is scarred, his blinded eye is bandaged, and with his other eye, with its deteriorating vision, he can only make out shadows.

He is a tidy person, an outstanding student. Since being shot, Salah, whose parents are devoting themselves to his care, has also suffered from mental agitation and nightmares, and he is seeing a psychotherapist.

The fact that an 11-year-old boy was shot in the face by security forces made no impact in Israel and did not rattle the police. About three weeks afterward, the police shot a neighbor, Mohammad Obaid – a child of 5 – in the face with a rubber-coated bullet…

Since last summer – the burning alive of 16-year-old Mohammed Abu Khdeir and the Israel Defense Forces war in the Gaza Strip – Isawiyah has become a battlefield. Regular policemen and Border Police, armed and armored from head to toe, are on every street corner. Their presence only heightens the tension and the violence. The “Skunk,” a crowd-control machine developed by Israel, occasionally sprays a foul-smelling liquid at and into residents’ homes, and the use of teargas has become routine.

A couple of weeks ago, villagers formed a committee of Hebrew-speaking volunteers, fo the purpose of representing residents in dealings with the municipality and also to work to protect the local children. One of them is driving around the village on a moped, a GoPro camera attached to his helmet, documenting events as they unfold. Most of the problems occur when the children, who have nowhere to go, leave school and start throwing stones at the policemen who are lurking for them at every corner.