A day in the life of a Palestinian child laborer

According to a Human Rights Watch report, hundreds of Palestinian youths, some as young as 11, are being employed on settlement farms. The work is hard, and conditions even harder. Three youngsters describe an average workday. 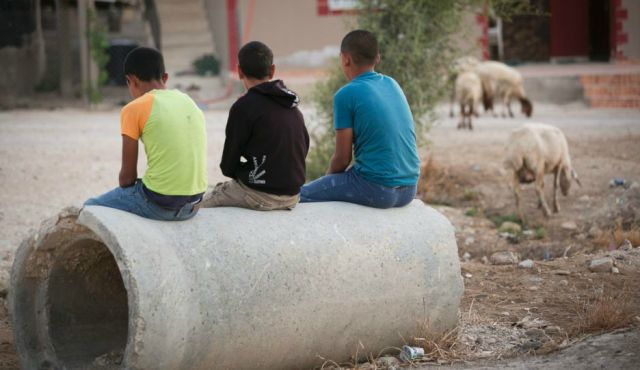 Ali, Mohammed and Yusuf (not their real names) all work on West Bank settlement farms, for 10 shekels per hour. Photo by David Bachar

Around 5 A.M., before sunrise, a Palestinian in the Jordan Valley leaves for work. There’s not much time. He has to reach the junction a few hundred meters away by 5:30. From there, he’ll go to work in one of the area’s Jewish settlements. Some go by foot, others in a vehicle usually belonging to a Palestinian subcontractor. They gather at the Moshav Tomer entrance, hop on a big wagon tied to a tractor, and head down a dirt road toward the vineyard.

Among the workers are Yusef, Mohammed and Ali, all aged 14-15. The boys use fake names out of fear of retribution from their employer.

Others on the crowded wagon look even younger. It’s hard to know for sure, but no one’s checking. Moshav Tomer’s security guard stands watching on the side. The workday begins.

Not even the Palestinian middlemen are concerned by the children’s ages. Their ability to survive economically depends almost entirely on working in the settlements. In April, Human Rights Watch issued a 74-page report (“Ripe for Abuse: Palestinian Child Labor in Israeli Agricultural Settlements in the West Bank”), stating that the settlements, primarily ones in the Jordan Valley, employ hundreds of Palestinian youths, many of them under the age of 15 (the legal working age).

The law places several limitations on how many hours children can work daily or weekly, and the type of labor. It’s hard to find observance here of the laws and local regulations, as well as the United Nations and International Labor Organization conventions to which Israel is a signatory. The lack of registration and supervision is part of the Israeli system of control, and allows those involved to close their eyes. It seems the settlements prefer it this way.

“We don’t hire children directly, period,” insists David Elhayani, head of the Jordan Valley Regional Council. “We don’t follow the contractors. Responsibility for the workers is theirs.”

The Human Rights Watch report was based on interviews with 38 children and 12 adults conducted in 2014. All of them were working in agriculture at various Jordan Valley settlements. The NGO also interviewed subcontractors and a number of educators in the region. Among the minors, 30 said they started working before age 15, most of them when they were 13 or 14. The youngest boy interviewed, who worked part-time in settlements, was 11, but one mentioned working alongside a 10-year-old.

The report estimates that at the height of the harvest season, upward of 1,000 youngsters work in the settlements. A workday can last 10-12 hours at this time. The work includes picking, cleaning, sorting and packing produce such as grapes, tomatoes, sweet peppers, onions and dates.

“If you sit down while you’re working with peppers or grapes, the supervisor will come and tell you to stand up and not take a break,” says I.A., a 15-year-old girl from Fasil. “We don’t get bathrooms – we get permission from the supervisor to go out in the fields. They are always yelling at us, not insulting us but saying, ‘Work faster, you’re too slow.’”

According to some of the children, they suffered from vomiting, dizziness and rashes after the crops were sprayed with pesticides. They had almost no protective gear to wear. Others spoke about extended work hours during the summer, while they were on vacation from school, and of temperatures reaching 40 degrees Celsius – and it was even hotter in the greenhouses.