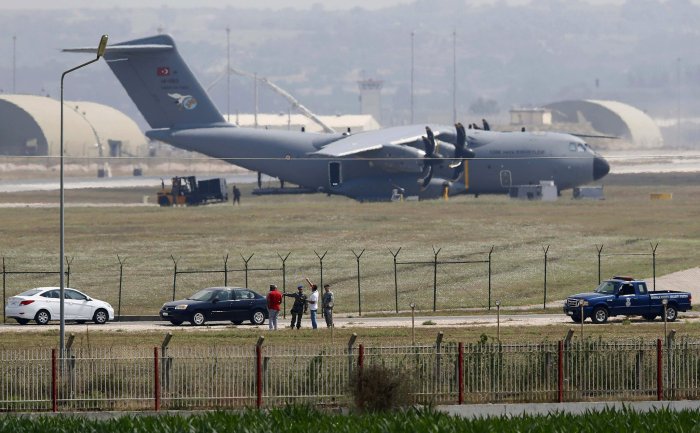 The Incirlik Air Base in southern Turkey on Monday. Turkey and the United States agreed on a plan that would create what officials are calling an Islamic State-free zone, which the Turks say could also be a “safe zone” for displaced Syrians. Credit Murad Sezer/Reuters

BAGHDAD — Turkey and the United States have agreed in general terms on a plan that envisions American warplanes, Syrian insurgents and Turkish forces working together to sweep Islamic State militants from a 60-mile-long strip of northern Syria along the Turkish border, American and Turkish officials say. The plan would create what officials from both countries are calling an Islamic State-free zone controlled by relatively moderate Syrian insurgents, which the Turks say could also be a “safe zone” for displaced Syrians. While many details have yet to be determined, including how deep the strip would extend into Syria, the plan would significantly intensify American and Turkish military action against Islamic State militants in the country, as well as the United States’ coordination with Syrian insurgents on the ground. The plan was described in recent days by four senior American officials, who were briefed on the talks and spoke on the condition of anonymity to discuss operational planning.

But the plan faces the same challenges that have long plagued American policy in Syria. While the United States is focused on the Islamic State, also known as ISIS, both the Turks and the Syrian insurgents see defeating President Bashar al-Assad of Syria as their first priority, even though Turkey has escalated its efforts against the Islamic State since the group was said to have carried out its first deadly bombing on Turkish soil last week. Whatever the goal, the plan will put American and allied warplanes closer than ever to areas that Syrian aircraft regularly bomb, raising the question of what they will do if Syrian warplanes attack their partners on the ground. And with only 60 Syrian insurgents having been formally vetted and trained by the United States under a Pentagon program, questions also remain about which Syrian insurgents and how many will be involved in the new operation. A larger number of rebels that American officials deem relatively moderate have been trained in a covert C.I.A. program, but on the battlefield they are often enmeshed or working in concert with more hard-line Islamist insurgents. In another complication, gains for such insurgents would come at the expense of Syrian Kurdish militias that are already fighting the Islamic State farther east with American air support and that have been eyeing the same territory. Turkish officials and Syrian opposition leaders are describing the agreement as something just short of a prize they have long sought as a tool against Mr. Assad: a no-fly zone in Syria near the Turkish border. They want such a zone in order to curb devastating Syrian government airstrikes on opposition areas, to allow refugees in Turkey to go home and to insulate Turkey from the war, and they call the new plan a “safe zone” that could achieve some of those goals.