A global oil glut has tanked prices and cut profits—so why won’t Shell give up on the north? 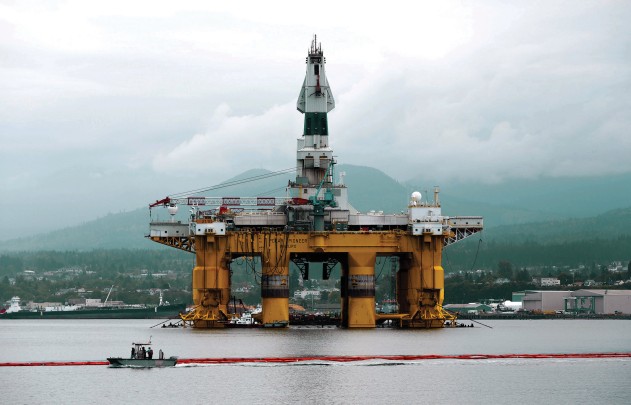 Surprise lurks in the Chukchi, whose frigid waters north of the Bering Strait span from Alaska to Siberia. Logistical and legal obstacles have repeatedly delayed the Arctic initiative, on which Shell is spending more than $1 billion a year—more than $7 billion so far and counting. The single well in the Chukchi Shell aims to excavate this summer could be the most expensive on earth, and it hasn’t yielded its first barrel of crude.

Activists have sued; judges have intervened. In 2010, work stopped when the Obama administration temporarily suspended offshore drilling throughout the U.S. after the BP disaster in the Gulf of Mexico. Back in action in 2012, Shell suffered a maritime fiasco with Keystone Kops undertones: Ship engines conked out, tow lines snapped, and a massive drill barge ran aground, requiring the U.S. Coast Guard to rescue storm-stranded workers. This July 16, former Vice President Al Gore called the Obama administration’s decision to approve Shell’s drilling “insane.”

Two weeks later, on July 30, Shell’s chief executive officer, Ben Van Beurden, announced that as a result of $50-a-barrel oil, a 55 percent decline since last year, the company’s profit fell by a third in the second quarter. Expecting prices to “remain low for some time,” Van Beurden announced plans to eliminate 6,500 jobs, part of a broader contraction in a reeling industry. Even against this challenging economic backdrop, Shell won’t postpone or downsize its Arctic dreams. The offshore Alaska field, Van Beurden said, “has the potential to be multiple times larger than the largest prospects in the U.S. Gulf of Mexico, so it’s huge.”

This raises the question of why Shell is doubling down on the Arctic amid a worldwide supply glut, and at the same time that many politicians are vowing to address global warming. Among the major oil companies, it stands out for its frank discussion of the threat posed by its business to the world’s climate. Its top executives have even professed a desire to rethink fossil fuels and move toward renewable energy sources. And yet it’s assuming immense operational risks to drill in the Arctic.

Even sympathetic observers find it curious, though, that Shell and Shell alone sees future profit in the Chukchi, especially after its misadventures there in 2012. Chevron, ConocoPhillips, ExxonMobil, Statoil, and Total have all put Arctic plans on hold. “Given the environmental and regulatory risks in the Arctic and the cost of producing in that difficult setting, assuming they ever get to producing, Shell must anticipate an enormous find—and future oil prices much higher than they are today,” says Nick Butler, a former senior strategy executive at BP who does energy research at King’s College London. “It’s a dangerous wager.”