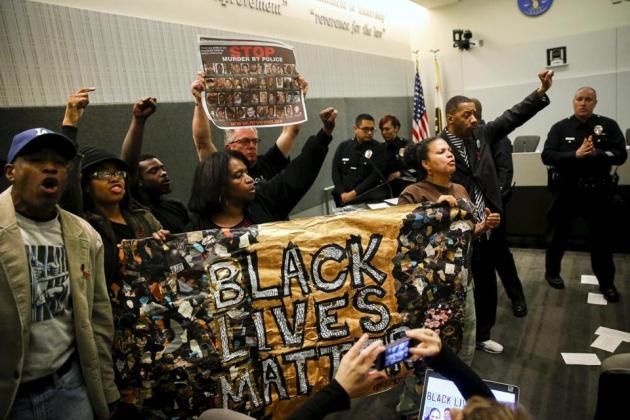 Demonstrators carried a “Black Lives Matter” banner while protesting the death of Ezell Ford during a meeting of the Los Angeles Police Commission in June.

The meme “All Lives Matter” is yet another effort to undermine legitimate calls to end antiblack police practices that characterize far too many interactions between police and citizens of color. Covered with a veneer of neutral and inclusive language, this mantra cleverly hides an intent to silence those who insist that police treat black citizens justly.

Perhaps the cry “All Lives Matter’’ would register as genuine if police unions expressed the same opprobrium when a fellow officer kills a person of color as they do when an officer is killed. But this rarely happens. Instead, police unions tend either to support or remain deafeningly silent when their own misbehave.

Of course, any killing of an innocent person should offend our collective moral sensibilities. All lives, self-evidently, matter. That is not the point. The point is that this country has been silent for decades, as citizens of color have been killed by those sworn to protect and serve. The Black Lives Matter movement is an attempt to shed light on a problem that has existed in the shadows.

Black Lives Matter is Under Attack

Black Lives Matter has come under attack due to recent high profile back-to-back murders of two journalists live on air in Virginia and a deputy in Houston. Both murders were absolutely wrong, despicable and unjustifiable, and both were committed by black men who seem to be suffering from or had a history of mental illness. These men were troubled, isolated loners with inaccurate distortions of victimization that contributed to their decision to murder innocent people. The same rhetoric has been said about Dylan Roof and Adam Lanza, when combined killed almost 30 people. Yet, the murders committed by two black men are being erroneously linked to a movement and it’s appalling to make that connection. And it’s even more disturbing to paint this movement as a hate group.

At its core, Black Lives Matter doesn’t even endorse violence, gunning down police or killing innocent people. Rather, this movement highlights how some blacks have unfairly died as a result of excessive police force and brutality. It galvanizes and unites both young and old via social media and grassroots efforts to push for further investigation into cases such as Sandra Bland, Eric Garner and Freddie Gray to name a few. Black Lives Matter has been at the forefront of pushing for the installation of body cameras on all officers to ensure the truth is being accurately reported in the arrests of blacks. Lately, Black Lives Matter has been responsible for pushing the agenda of police accountability to politicians running for local and national office, and it has been responsible for healthy changes in policing practices and policies.