The solution is not opening up Europe’s borders; it’s defeating ISIL and removing Assad from power. 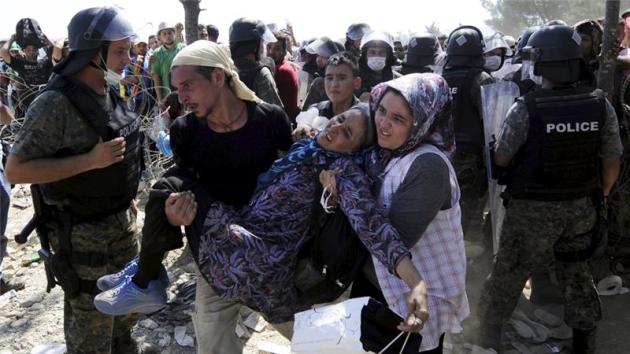 If this is the existential threat and the battle of our generation, as David Cameron puts it, we do not appear to be doing much about it, writes de Bretton-Gordon [Reuters]

Europe and the Middle East are looking at a million refugees needing help today. This figure could easily escalate to five million by the end of the year, unless there is a significant policy shift by the international community towards Syria.

But are we missing the point about opening our doors to Syrian refugees? Surely we must set the conditions to allow them to return as soon as possible to their homes in Syria?

Listening to news media today demanding that the UK government and others open their doors to thousands of Syrian refugees strikes me as the completely wrong approach – and illustrates that we really haven’t learned lessons from Iraq and Afghanistan.

I’ve been to Syria a bit in the last four years and to Iraq and Afghanistan a lot over the last 25 years. I know many Syrians; every single one wants to return to Syria.

The refugee problem in Europe is of our own making. It is a direct result of our inactivity towards Syria hitherto, and particular, us ignoring the perceived and stated red lines on the use of chemical weapons after the Ghouta chemical attack in August 2013, which killed up to 1,500 people.

ISIL is now using deadly chemical weapons, like mustard gas. This must be the last straw – now with every red line of whatever diameter now crossed. Some advocate prevarication to allow the Chilcot Enquiry on Iraq to be published. Presumably, this is to ensure that we do not make the same mistake as the 2003 invasion of Iraq.

But from personal experience, I can say unequivocally that Iraq 2003 and Syria 2015 are completely different situations. For one, we didn’t have millions of refugees in 2003, though there were other terrible issues that we did have in Iraq.

There is not a second to be lost, and the UK could have made this decision to attack ISIL in Syria back in July when Michael Fallon, the UK defence minister, first suggested it.

If this is the existential threat and the battle of our generation, as Prime Minister David Cameron put it, we do not appear to be doing much about it.

It seems pretty clear now after three attacks in Iraq and three in Syria in the past ten days that ISIL has significant quantities of the deadly “Class 1” chemical agent, mustard gas.