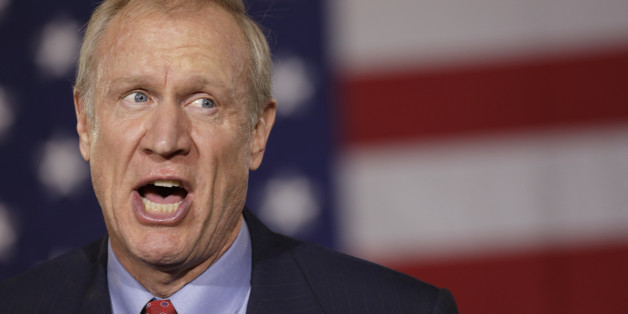 Rauner makes me long for Blagojevich, who tried to sell Obama’s senate seat, or Quinn, one of the most incompetent governors in Illinois history. Hell, I’d take Ryan over Rauner, given the choice. Illinois politics suck more than at anytime I can remember, in the 61 years I have lived in Illinois (all my life!). Personally, I want Rauner to be impeached or otherwise forced from office.

Now that he’s in office his first moves have confirmed that he is the poster boy for the War on the Middle Class.

Rauner is a hybrid of the worst traits of Mitt Romney and Wisconsin Governor Scott Walker. In fact, you could say he personally embodies the reason why — even though our economy has grown 77% in the last 35 years — the wages of ordinary Americans have been stagnant or actually declined.

For those who are unfamiliar with Rauner, all you need to know is summed up in one brief story. Early in the GOP primary, Rauner made it clear that he wanted to reduce Illinois’ minimum wage — and at one point even indicated he wanted it abolished entirely. Yet last year Rauner himself made more than $25,000 per hour — fifty-two million dollars per year. That’s right, he made more than an average minimum wage worker makes all year long in less than the first hour of the first day of the year.

Now, by the way, in the face of the overwhelming passage of a referendum calling for an increase in the state minimum wage, Rauner has grudgingly agreed to support an increase — of twenty-five cents per hour per year over seven years. That’s barely more than the rate of inflation.

Much like Romney, Rauner made his money as an investor and speculator. After he bought many of those businesses, he bled them of cash.

His companies moved over 4,000 jobs abroad.

One of Rauner’s companies, Trans Healthcare Inc., owned over 200 nursing homes. The firm had judgments issued against it for over $2 billion for patient neglect. Rather than fix the problems and pay the claims, Rauner’s investment firm sold Trans Healthcare to a company that then declared bankruptcy and dodged paying the claims of the abused residents.

Now that he is governor, Rauner has proposed draconian limits on the collective bargaining rights of unions representing state employees, cutting back on their pay, prohibiting workers from being able to negotiate over wages and benefits, and transferring all future state pension benefits into risky 401(k) plans.

And he has declared war on middle class state employee salaries.

Rauner brazenly claims that state employees’ average wage of $64,000 per year is simply too high. This from a man who makes $64,000 in two and a half hours.

That’s right, a guy who last year made $25,000 an hour speculating and flying around on a corporate jet, is furious that someone who works 40 hours a week pouring concrete, laying hot asphalt and fixing potholes — serious physical work — makes as much all year as he does in two hours.

Rauner’s first major assault on the middle class was an executive order giving state workers who are covered by labor contracts the choice to benefit from those contracts without paying a “fair share” contribution to support the union that negotiates and administers them.

Rauner — and other anti-union ideologues — claim that workers should not be “forced” to join unions against their will. In fact no one is forced to join a union. The provisions in labor agreements with state unions — in many states — require that after state workers have democratically chosen a bargaining agent, that employees who do not wish to join the union should pay a “fair share” contribution to support the portions of the union’s operations that negotiate and administer the provisions of the labor contract from which they are benefiting.

Note that they are not required to contribute to any of the political activities of the union.

This is the same principle we use at all levels of democratic government. Once an election is held for mayor and the city council, you can’t refuse to pay taxes to support the functions of the government from which you benefit. City government produces what economists refer to a “public goods”. They engage in activities that benefit everyone, even if you don’t “pay” for the products and services. That’s why we have taxes. Otherwise there would be perverse incentive for “free riders” who would benefit but don’t contribute.

The same is true with unions.

Rauner’s actions have nothing to do with giving employees a “choice”. They have everything to do with reducing the resources that are available to unions — which he is determined to destroy.

Since unions — and collective bargaining — are the major weapons every day people have to raise their wages, his assault on unions is a direct attack on the middle class and its future in America.

It’s not just that Rauner drips with hypocrisy. His view of the world is emblematic of the massive difference in perspective between most ordinary Americans and the privileged .01%.