Home › Environment › Climate change › Why Is Louisiana Flooding So Badly, And How Can We Prepare For It Next Time?

Why Is Louisiana Flooding So Badly, And How Can We Prepare For It Next Time?

What Happened In Louisiana?

Barry Keim, Louisiana State Climatologist and a professor of climatology, can trace the storm back to August 3, when it formed just off the coast of Florida, a disturbance in the weather pattern called an easterly wave. It lurched towards the Gulf Coast, swelling with water vapor in the hot, humid weather, gathering water but not speed.

“This event basically was like a hurricane without the winds,” Keim says.

A word that keeps coming up as Keim talks about the event is ‘unprecedented’. Official National Weather Service gauges measured the rain that overwhelmed the region as 21.86 inches falling in 48 hours. An unofficial gauge, Keim says, run by the Community Collaborative Rain, Hail, and Snow Network measured 31.39 inches in two days.

The water couldn’t soak into the ground like it normally would. Rain from earlier storms still sat in the soil. The rain began running off into the tributaries and streams, quickly pushing them past capacity and flooding vast swaths of low-lying land, which, in Louisiana, is just about everywhere.

It was like no flood that the area had seen before. The last major flood had been in 1983, and then the waters in the nearby rivers hadn’t risen nearly as high, lending people a false sense of security. 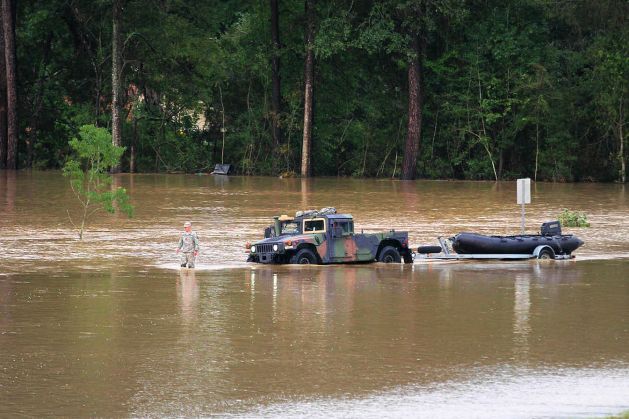 A Louisiana National Guardsman guiding a Humvee through floodwaters off of I-12 outside of Denham Springs. (U.S. Army National Guard photo by Spc. Garrett L. Dipuma/RELEASED)

Eric P. Salathé studies how climate change and flooding intersect at the University of Washington.

“Everything is completely unprecedented until it happens,” he says. “And now that it has happened, it changes our thoughts about the likelihood of these events.”

The event in Louisiana was a 1000-year event–one that, statistically speaking, is only expected to come once every 1000 years. But … there’s always a but:

“We have to take that 1000-year record with a grain of salt, because we’re basing that on a record that’s probably less than 100 years in length,” Keim says.

Not only are the statistics of what makes a 1000-year flood or a 100-year flood based on a relatively short record of historical data, the climate itself has changed during the time since records started being kept, so predictions that might have made sense decades ago aren’t making quite as much sense now.

“We are not working from the appropriate data any longer,” says Salathé. “That’s the risk, that’s the challenge, that’s the fear. This is a 1000-year event, but it might not be any more. It might have been in the 1920s, but it isn’t now.”

The main issue, as always, is temperature. Warmer air (and we just lived through the warmest month in recorded history) can carry more water than cooler air. That means that when a large, extreme storm forms, it can carry vastly more water than in the past, and with warmer temperatures in general, the likelihood of those storms happening goes up.

“A lot of it is having the political will to hold the line on these things that might not happen for another fifty years, but probably will happen at some point,” Salathé says. “Its very hard to make decisions that have a high risk but a low probability.”

Like Loading...
‹ ‘It’s NOT safe in Germany anymore’ German family flee to Russia to claim asylum
The Future of Wind Turbines? No Blades ›