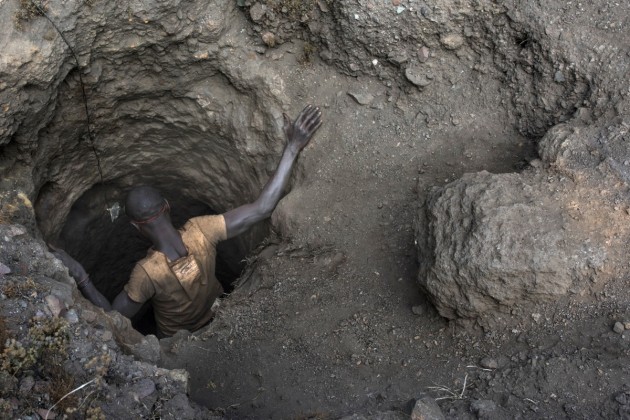 A “creuseur” descends into a tunnel at the mine in Kawama. The tunnels are dug with hand tools and burrow deep underground.

The sun was rising over one of the richest mineral deposits on Earth, in one of the poorest countries, as Sidiki Mayamba got ready for work.

Mayamba is a cobalt miner. And the red-dirt savanna stretching outside his door contains such an astonishing wealth of cobalt and other minerals that a geologist once described it as a “scandale geologique.”

This remote landscape in southern Africa lies at the heart of the world’s mad scramble for cheap cobalt, a mineral essential to the rechargeable lithium-ion batteries that power smartphones, laptops and electric vehicles made by companies such as Apple, Samsung and major automakers.

But Mayamba, 35, knew nothing about his role in this sprawling global supply chain. He grabbed his metal shovel and broken-headed hammer from a corner of the room he shares with his wife and child. He pulled on a dust-stained jacket. A proud man, he likes to wear a button-down shirt even to mine. And he planned to mine by hand all day and through the night. He would nap in the underground tunnels. No industrial tools. Not even a hard hat. The risk of a cave-in is constant.

“Do you have enough money to buy flour today?” he asked his wife.

She did. But now a debt collector stood at the door. The family owed money for salt. Flour would have to wait.

Mayamba tried to reassure his wife. He said goodbye to his son. Then he slung his shovel over his shoulder. It was time.

The world’s soaring demand for cobalt is at times met by workers, including children, who labor in harsh and dangerous conditions. An estimated 100,000 cobalt miners in Congo use hand tools to dig hundreds of feet underground with little oversight and few safety measures, according to workers, government officials and evidence found by The Washington Post during visits to remote mines. Deaths and injuries are common. And the mining activity exposes local communities to levels of toxic metals that appear to be linked to ailments that include breathing problems and birth defects, health officials say.

The Post traced this cobalt pipeline and, for the first time, showed how cobalt mined in these harsh conditions ends up in popular consumer products. It moves from small-scale Congolese mines to a single Chinese company — Congo DongFang International Mining, part of one of the world’s biggest cobalt producers, Zhejiang Huayou Cobalt — that for years has supplied some of the world’s largest battery makers. They, in turn, have produced the batteries found inside products such as Apple’s iPhones — a finding that calls into question corporate assertions that they are capable of monitoring their supply chains for human rights abuses or child labor.