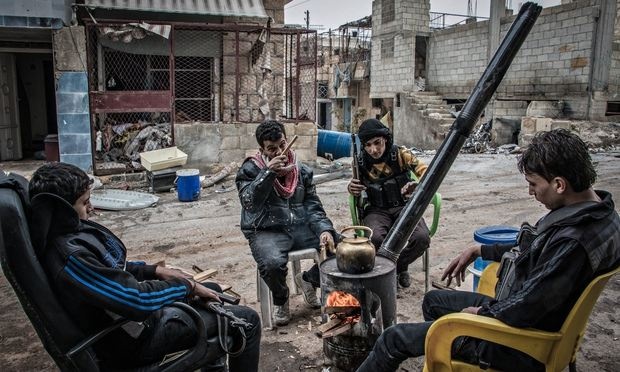 A group of rebel fighters sit around a fire in Aleppo. Photograph: Karam Almasri/NurPhoto/Rex Features

By Martin Chulov in Aleppo in The Guardian

The last road into rebel-held east Aleppo carves though a mile-wide paddock between an abandoned village and a looming ridgeline. Behind each of them Syrian troops advance slowly, hidden from view.

Trucks, cars and motorbikes bump through the green field, gouging deep muddy holes that are starting to resemble trenches, before joining a gravel path along a sand berm that shelters the final passage into what is left of the city.

After two-and-a-half years of war, the Aleppo at the end of the makeshift road is a wasteland where only gunmen, soldiers and a few desperate civilians now tread. Those who dare do so tentatively, knowing that the defining fight for one of the cradles of civilisation is now imminent.

Whoever wins the coming battle for northern Syria will go a long way towards victory in the war that has levelled much of the country and set the neighbourhood ablaze, threatening borders drawn a century ago and shattering several millennia of co-existence from the Mediterranean coast to Iraq’s Ninevah plains.

Like Loading...
‹ Can the Israeli and Western Press be trusted? Palestinian SPRAYS acid on “Israeli” Family!!!
Passive to Aggressive -Depletion of Human Capital ›