Operation Migration has played a lead role in the reintroduction of endangered Whooping cranes into eastern North America since 2001. In the 1940s the species was reduced to just 15 birds.

Using ultralight aircraft, Operation Migration pilots act as surrogate parents and guide captive-hatched and imprinted Whooping cranes along a planned migration route beginning in Wisconsin and ending in Florida – as depicted in the Columbia Pictures film “Fly Away Home.” 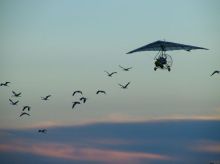 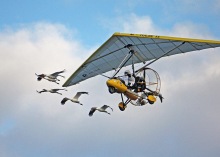 Unfortunately this mode of reintroducing cranes is over . Other ways will be developed, but no more following planes.  Joe Duff, one of the co-founders of Operation Migration, explains in today’s In the Field journal entry:

That’s all she wrote…

There are a number of inhibitors to a successful reintroduction of Whooping cranes. Firstly, you need a method of teaching them migration. Then you must get enough of them onto the landscape so a high percentage will survive to reach breeding age. You must ensure they exhibit wild behavior and mate with their own kind.

Operation Migration team has been very successful in achieving those goals. In fact, the Ultralight led method we pioneered comes closer than any other technique yet developed. It provides the highest survival rate, greater pairing and the only fledged chicks produced in the Eastern Migratory Population.

Despite those achievements, you can only judge the success of a wildlife reintroduction by fecundity or the ability for the population to produce young and grow to a self-sustaining level.  Of the 240 plus birds released into the EMP, only ten chicks have survived to fledge. We have taken pride in the fact that all of those successes have been the result of UL pairs, but it’s a long ways from sustainability.

So why, despite their appropriate behavior, are the offspring our birds produce not surviving? Why, in 2015, did so many eggs hatch but only three chicks survive? Certainly habitat and the blackflies at Necedah had an effect but the blackflies are mostly gone by the time those chicks were lost. Maybe predation played a role but the more likely cause is inattentiveness of the parents. In fact, that could explain why many of those birds abandoned their nest when wild Sandhill cranes, in the same habitat, succeeded at a much higher rate. Why have all attempts to reintroduce Whooping cranes also failed due to low recruitment? Maybe here is a common thread that we have all overlooked.

There are two possibilities. The first is hand rearing. Maybe in their early development, hand raised chicks miss some behavior that only real parents can teach. All of the Whooping crane reintroduction projects have used hand or costumed reared birds and maybe we can teach them to migrate and be wild birds, but not how to be good parents.

The second unknown is captive selection. When animals are raised in captivity for multiple generations they undergo genetic changes that may weaken their ability to persist in the wild. They live on a fixed diet, they don’t fly and they are not subjected to the regular adrenalin rush of avoiding predators. With so few Whooping cranes left, each one is precious and vet teams treat them for conditions that would normally kill untreated birds in the wild. In the human population, modern medicine can cure people with susceptibilities to certain illnesses. Healthy again, they live on to produce children with the same predisposition for that illness.  Genetic changes like these have been documented in many captive animals and it is surprising how quickly it can occur.

Of these two possible inhibitors, there is only one that WCEP can address. To test captive selection you would need eggs collected from wild stock in Wood Buffalo National Park where the only surviving wild flock nests. That will be a long process involving two federal governments with the final decision in the hands of Environment Canada. We can promote that idea but it is beyond the authority of WCEP.

We can, however, answer the costume rearing question by providing adult role models or improving the parent rearing method so the sample size is large enough to evaluate.

Last August we hired Jeff Fox to fill a gap in our team. We have many multi-talented people on our staff but no accredited scientists. Jeff is a population ecologist and since he began, he has been reading research papers and using the WCEP database to see how the UL method stands up against other techniques. Unfortunately, the more he dug, the more discrepancies he found in that database.

We proposed to the Fish and Wildlife Service that no major changes in release methods should be considered until that database can be corrected and an evaluation conducted. However, even without an accurate database, it is fairly easy to see that we have released a lot of birds for only ten chicks to survive to fledging age.

In light of this information and in the days before the meeting, we were faced with a dilemma. Was it fair to the birds and our supporters to release more chicks into the Wisconsin Rectangle if costume rearing and/or captive selection is the root of the problem? Would more birds result in higher fecundity? Jeff also pointed out that since the Recovery Team approved the Louisiana Flock, we have been releasing 6 and 7 birds a year at White River compared to the 20 or so we released annually during the early years at Necedah. Complicating that is the gender bias with more males than females. He predicted that even without blackflies, there was little likelihood of successful breeding in the near future with such a small sample size.

Last Tuesday afternoon, Heather, Jo-Anne and I attended a mediated meeting with three representatives of the US Fish and Wildlife Service. Billy Brooks was there from Region 2 in Florida along with Wade Harrell who is the coordinator of the Recovery Team and Pete Fasbender, lead author of the Vision Document.  It was a very candid and enlightening conversation with both sides opening up with the mediator’s help. One of the issues discussed was how the Vision Document appeared to be an attack on OM and the UL method in favor of the DAR technique. Pete agreed and took responsibility for those mistakes but he pointed out that their directive wasn’t intended to target the UL method but all releases techniques that rely heavily on hand rearing.

During the WCEP meetings, the issue of technique evaluation was not addressed. Instead we focused on ways to keep released birds with adult role models for as early, and as long as possible.

On Friday after the WCEP meetings, the Guidance Team gathered in a small boardroom at ICF. Pete Fasbender spoke first and after a long presentation about the future of the EMP and OM’s contribution, he told me that the decision was final. There will be no more aircraft led releases.

There are many roles that Operation Migration can serve within WCEP including developing a new, less invasive release technique at White River. Those options need to be explored and expanded but we are moving forward to clear this hurdle, just as we have cleared so many in the past.

It is sad to see the end of aircraft led migration. There will be many people who will be disappointed and even a few who will celebrate. But those reactions are all about people and our mantra has always been, it’s about the birds.

There are no words to express our gratitude to all of those who supported OM over the last fifteen years. We have a hundred birds in the EMP that would not be there without your efforts and support. They survive, they migrate, they pair and they are wild. Now we need to teach them to be good parents and we hope you will help us over that obstacle as you have so many times in the past.